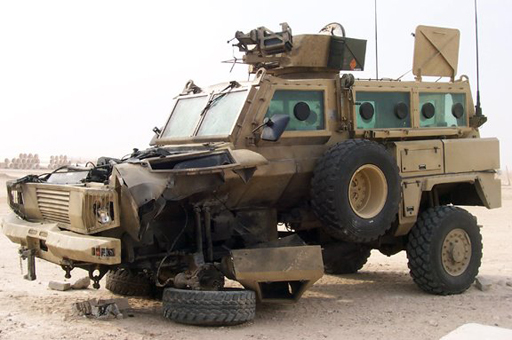 One can be critical of the media for its inability to cope with the basics, but the fount of disinformation rests with the Ministry of Defence, the propaganda from which never varies. Thus, in response to criticisms about the level of protection offered by the Warrior, we get the current office-holder, Philip Hammond primed to sound just like his Labour predecessors six years ago.

Via The Independent we thus learn that sock-puppet Hammond has "defended the level of protection offered by the vehicle", saying: "The Warrior is the most heavily armoured vehicle that we have. It has been very heavily upgraded following some criticism that was made of the level of protection by a coroner. That programme of upgrading has been completed".

Rightly he then says: "In fighting a war you can never be a hundred-percent protected. We don't know what happened in this incident - it looks like a massive IED that had a catastrophic impact on the vehicle".

But then we get the MoD propaganda, straight from the "line to take" briefing: "Obviously", says Hammond, "we will look at any lessons that can be learnt but talk to soldiers on the ground - they will tell you that there is a trade-off between level of armour and manoeuvrability  You can put more armour on a vehicle but then you make it slower and less manoeuvrable and that in itself creates risk".

Now go back to six years to 12 June 2006 and Labour's Lord Drayson defending the Snatch Land Rover. And, as we found then, we get exactly the same leaden argument. The "noble" Lord says: "We must recognise the difference between protection and survivability. It is important that we have the trade-offs that we need for mobility".

What is terrifying is that, in the MoD, they do think this way, and they really do believe what they are saying. Armour equals weight and weight restricts mobility. That is as far as their little brains can take them.

Not so very long ago I complained to a very senior MP (ex-minister) that the MoD seemed to have no idea of the five design principles for mine protection. I got back a plaintive e-mail asking: "what are the five principles of mine protection?".

Laboriously, I explained: distance; absorption; deflection; isolation and armour. In "distance", you have the front wheels as far ahead of the protective cell as possible, and mount the cell high up. The greater the distance from the blast, the less the effect.

Absorption means making frangible parts which blow off, absorbing energy and again reducing blast effect. Deflection is the v-shaped hull and "isolation" means preventing contact between the crew and the hull. In the best designs, the seats are suspended from the roofs of the vehicles, and the soldiers have foot-rests which keep their feet off the floor  thus preventing the shock being transmitted to them.

Last, and least then comes armour. And no amount of armour will protect if the other basic principles are wrong, or the armour is in the wrong place. By the end of the Iraqi occupation, the insurgents had learned how to take out Challenger and Abrams tanks. Yet the Cougars and Mastiffs, at less than half their weights, survived. In a 7-ton RG31, the crew survives (above)  in a 60-ton Challenger, they don't.  The difference is design.

Technicalities aside, though, what this goes to prove is that ministers really are sock-puppets. Without brains or experience of their own, they are simply primed by their civil servants with the same old mantras. These, they spew out on demand, seemingly unaware that their predecessors, and those before even them, were spouting exactly the same mantras, with like effect.

You would think they might learn. But they do not.