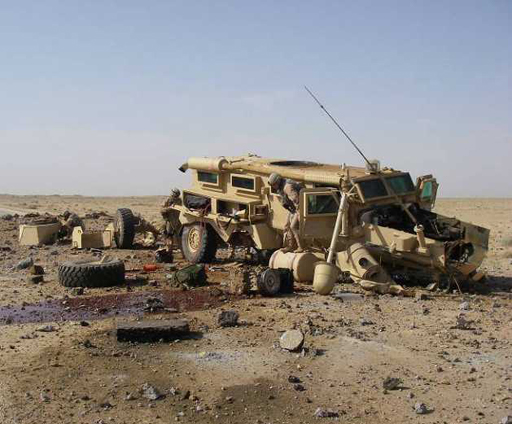 There is much discussion in the media, for once, about the fatal weakness of the Warrior, in having a flat-bottomed hull. If we have achieved anything over the last six years, therefore, it is to lodge in the public and media consciousness the merits of the v-shaped hull.

Nevertheless, one still gets the comments that, if you add armour, all that will happen is that the enemy will build bigger bombs. Well, indeed that is exactly what has happened yet, it is germane to note that despite this, not a single person has been killed in a Mastiff  not a single person.

The reason is precisely because the v-shaped hull deflects the blast rather than trying to provide a barrier. Thus, when a Cougar, on which the Mastiff is based, was hit by a 100Kg bomb, the crew survived (pictured above). By comparison, an anti-tank mine typically has seven kilogrammes of explosive.

However, when in 2006 we sought to extol the merits of the v-shaped hull, the "bigger bomb" theorists were out in force, and I took a great of flak  especially from the "experts" on the ARRSE forum.

But all of this debate seems to pass by certain sections of the media, as we get the likes of The Daily Mail calling for additional armour on the Warrior (pic below), heedless of the fact that mine protection must be designed in ab initio. It cannot be bolted on. 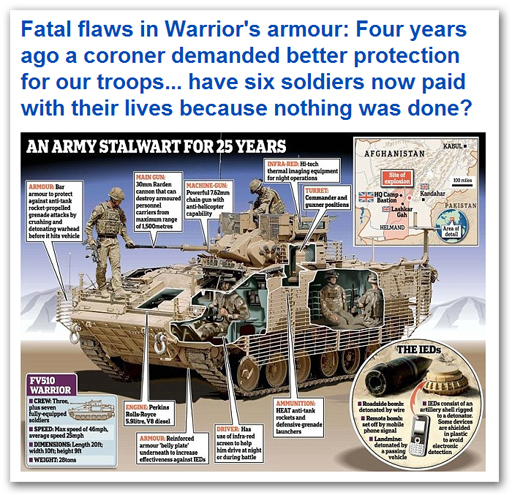 Where vehicles such as the Warrior are deployed, therefore, protection requires a multi-faceted approach and, for all my many critics, it is worth recording that my first sojourn into this field argued for better detection of IEDs, noting that extra armour was not the solution.

And, therein lies the problem with the Warrior. Add armour to the flat underside and you risk the same fate as the Bradley in Iraq in 2007, which was flipped over on its back by the force of an explosion, killing six soldiers and an interpreter.

The essential flaw with the Warrior and its deployment in Afghanistan is that a mechanised infantry fighting vehicle (MICV) is being misused as a patrol vehicle. We had the the same problem in Iraq but, just because a coroner calls for extra armour, that does not make it the answer.

It is about time newspapers such as The Mail learned something of the basics.