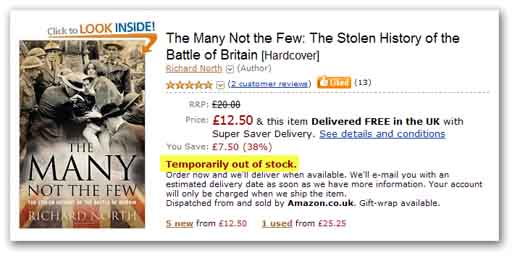 With more "launches" than the Metropolitan Police river patrol, and as many different dates as Hitler's abortive invasion, The Many Not The Few is finally "available" on Amazon on what is now supposed to be the official launch date. But can you buy it? Dear me no! From "not yet released" it is now "temporarily out of stock". I suppose that is progress.

On the brighter side, we are having an unofficial not-a-launch-party in the House of Commons on Monday 26 March, between 4-6 pm, when I will be giving a lecturette on the role of J B Priestley in the Battle of Britain. The meeting is open to readers (frustrated or otherwise) but by invitation only.

If you want to come to this not-a-launch, please e-mail me and I will get an invitation sent to you.