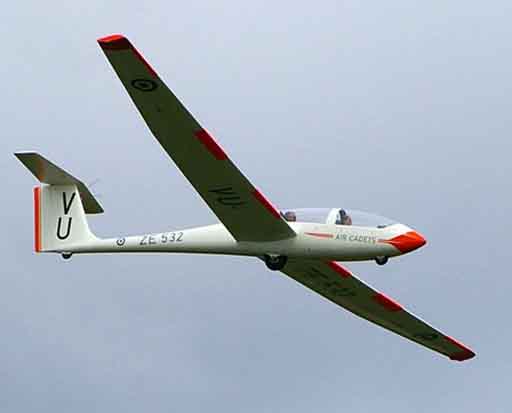 This administration  bad by any measure  has plumbed new depths in responding to a routine enquiry from SNP defence spokesman Angus Robertson, on the details of defence equipment based in Scotland.

The written answer from Lib-Dim armed forces minister Nick Harvey appeared to suggest that the number of aircraft based in Scotland had risen from 66 to 80, despite the closure of two of the three RAF bases north of the Border.

However, for the first time it was not specified whether the aircraft were Tornado or Eurofighter jets  and it later emerged that the MoD had included 13 gliders used for cadet training in the statistics  the first time this had ever been done.

The aircraft included five Viking cadet gliders at Kirknewton (type pictured above) and another five of the same model in Arbroath, as well as three Vigilant Power gliders based at Kinloss and Lossiemouth in Moray.

This really is getting seriously bad when the MoD is effectively including training gliders in the order of battle, although if the cuts continue it may well be that these aircraft find their way onto the front line. The impact on the enemy could be quite profound  with hundreds set to die laughing.