The source of our problems 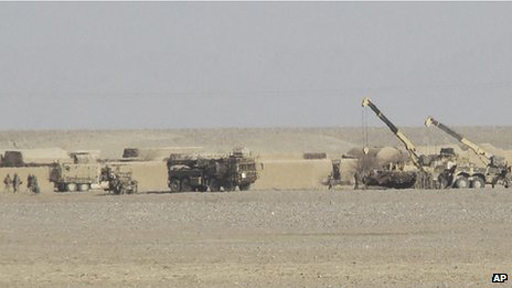 Is it very easy to draw a range of conclusions from the Warrior incident, not all of which are consistent with each other or sustainable. Given the circumstances, some might venture that Taliban have only just worked out how to destroy a Warrior, in which case it would be valid to speculate on where the Taliban are getting the expertise to improve their IEDs.

On this basis, it would be quite logical to point the finger of suspicion at the Iran - the Islamic Republic's Revolutionary Guards Corps, which "is the regional expert in the development of weapons of this kind".

However, the Taliban have already twice taken out Warriors with fatalities reported. The first time was in November 2008. That incident was then  nearly four years ago - considered by The Daily Mail (headline below) to be "proof" that the Taliban were "turning to bigger and deadlier bombs targeted at British troops". 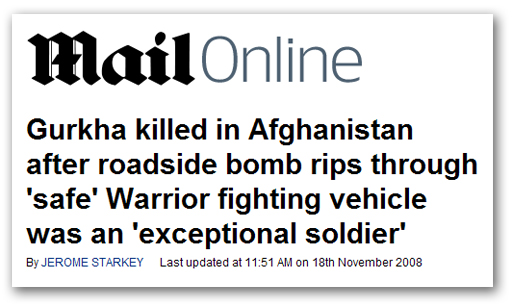 By then, the Warrior had been in theatre for sixteen months. In the previous eight months, the Mail reported that at least three Warriors had been damaged "beyond repair", "as the Taliban bomb makers set ever bigger charges in British soldiers' paths." Out of a fleet numbering only fourteen, this was (and is) a high proportion.

Thus, there is nothing really new about this capability. Although there are suggestions that this current incident will make it essential to introduce new and expensive countermeasures to protect the remaining fleet, there is very little that can be done to the Warriors to enhance their protection.

The weapon of choice, the Ammonium Nitrate Fuel Oil (AFNO) bomb, is a formidable instrument. But it is very old technology and has been used for many years by the Taliban. At weights of up to 250Kg, used in culverts, it can have devastating results.

As to countermeasures, rather than armour, surveillance and patrolling are the main options. Certainly, there is only a limited amount that can be done in the way of adding armour protection to a design which is not optimised for mine/IED protection.

Much more could have been done in the past, but with troops scheduled to depart by 2014, there is little more that probably will be done over the next two years. But one does look askance at Dannatt's comments, with him saying that the deaths of six soldiers were a matter of "great sorrow and sadness".

Had it been left to him, British troops would have been equipped with Piranhas, under the guise of FRES, with far greater slaughter than we have already experienced  as recounted in Ministry of Defeat.

Iran, thus  in this case  is probably the least of our problems and we need to look a lot closer to home for their source. One of them, currently, is sitting in the House of Lords.