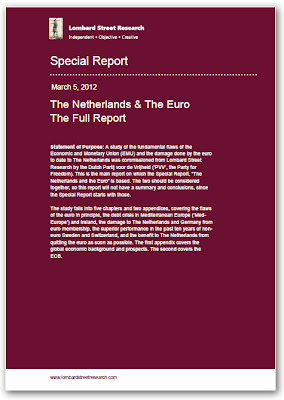 Taking a break from his prolonged break (in blogging), Klein Verzet brings us a "bit of news"  a report, he says, that "will blow up the eurozone".

This shows that the Netherlands would benefit financially from leaving the euro and returning to the guilder (75-pages available here). It was commissioned by Geert Wilders and produced by Lombard Street Research.

The bottom line is that the euro has damaged the Netherlands' prosperity. For example, the Dutch economy has grown an average 1.25 percent per annum since the euro was introduced, compared with three percent each year in the twenty preceding years.

Yet over the past ten years, the economies of Sweden and Switzerland, which are not members of the eurozone, have grown 2.25 and 1.75 percent respectively, the report states.

Leaving the euro now will cost up to 51 billion, but that would be more than offset by the 75 billion saved by not propping up the single currency, Wilders says. Predictably, he wants a referendum on the issue  which, of course, will not happen in the foreseeable future, as it might give the "wrong" result.