Eurocrash: the end of Merkel's Europe? 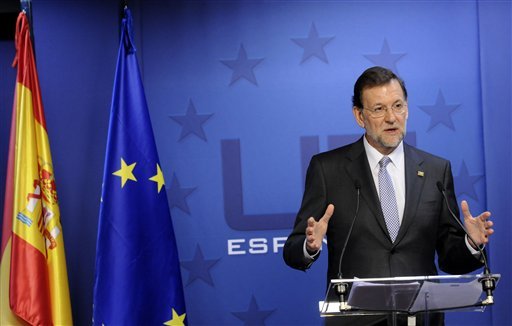 One is just a tad surprised by the surprise expressed over Mariano Rajoy's surprise announcement about the Spanish deficit last week. That is because, if one recalls what the prime minister was saying at the end of February, it should not have come as a surprise.

Anyhow, even if the Financial Times was surprised when Rajoy said that Spain was going to breach its budget target for the year, that is nothing to what Ambrose is calling it - no less than a "thunderclap".

But, it seems, it is not only what Rajoy has done, but the way he has done it  or, to be more precise  what he has been saying. Bearing in mind that the "colleagues" had just signed their fabulous new treaty, taking the eurzone closer to fiscal union, up pops Rajoy and says: "Democracy, national sovereignty and dignity of the states and their citizens in a democratic Europe that is said is much more important than the supposed 'fiscal union' of the EU".

This is as close to farting in church as it gets, and what Ambrose finds striking is the wave of support for Mr Rajoy from the Spanish commentariat. One from Pablo Sebastián, he says, left me speechless.

"Spain isnt any old country that will allow itself to be humiliated by the German Chancellor," he writes  as loosely translated by Ambrose. "The behaviour of the European Commission towards Spain over recent days has been infamous and exceeds their treaty powers  these Eurocrats think they are the owners and masters of Spain".

"Spain", he continues, "and other nations in the EU are sick and tired of Chancellor Merkel's meddling and Germany's usurpation  with the help of Sarkozy's France and their pretended 'executive presidency' that does not in fact exist in EU treaties".

There is then reference to the behaviour of the EU commission to Spain in recent days being "infamous" and "exceeded the powers granted to this institution to the Treaties", and a complaint that the Eurocrats are acting "as if they were owners and lords of the Government of Spain".
Thus does Sebastián say: "Rajoy must not retreat one inch. The stakes are high and the country is in no mood to suffer humiliations from a Chancellor who is amassing all the savings of Europe and won't listen to anybody, as if she were the absolute ruler of the Union".

"Merkel and the Commission should think hard before putting their hand into the sovereignty of this country  or any other  because it will be burned and the citizens are not going to consent".

This then is the fermenting mood in the fiercely proud and ancient nation of Spain in Year III of depression, probably the worst depression the country has seen since the 1640s, says Ambrose. And he sees in this trenchant comment the awakening of the Latin Bloc  and the end of Merkel's Europe.

If that is the case, it really would be something.