Has the greenie spell broken? 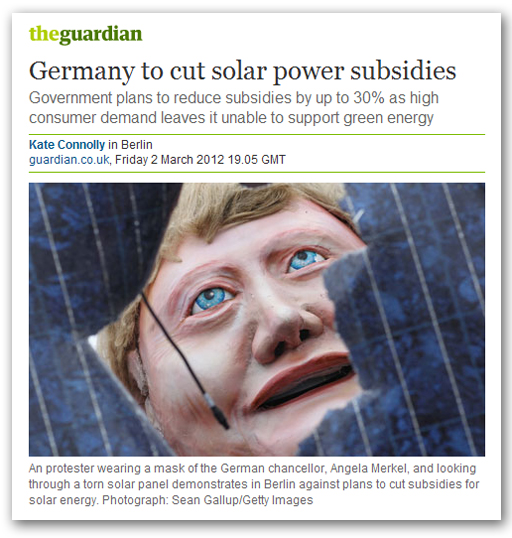 Cuts were already in the works and, over the last three years, subsidies have been slashed by up to 50 percent. But, says environment minister, Norbert Röttgen, the incentives are still too high.

So it is that the Germans are again cutting subsidies, this time by a further 30 percent, in a plan which, according to David Wedepohl, spokesman for the German Solar Industry Association, " amounts to nothing less than a solar phase-out law".

With the feed-in tariffs established in 1991 by the Electricity Feed-in Law, that makes it just over twenty years for the madness to work its way through the system, and now that the generators are embracing coal in a big way, it looks as if the greenie spell is being broken.

This is coming not a moment too soon for, even last week, Spiegel was complaining that rising energy prices were endangering German industry. It had Hans Heinrich Driftmann, president of the Association of German Chambers of Industry and Commerce, saying that energy supply was now "the top risk for Germany as a location for business".

Bernd Kalwa, a member of the general works council at ThyssenKrupp, was also cited, warning that: "Some 5,000 jobs are in jeopardy within our company alone, because an irresponsible energy policy is being pursued in Düsseldorf and Berlin".

In the run-up to German general elections in 2013 and prior to state elections, Kalwa and his colleagues plan to march into party meetings and ask how the candidates intend to regulate the energy supply in Germany in a cost-effective and reliable manner.

That seems to be making the difference. Unlike the UK, energy is going to be an electoral issue, and one which the politicians cannot afford to ignore. However, according to The Guardian, the greenies are also set to fight back, with thousands of demonstrators planning on Monday to gather at Berlin's Brandenburg Gate to protest under the banner, "Stop the Solar Phase Out".

To whom the federal and state governments listen will be interesting to see.