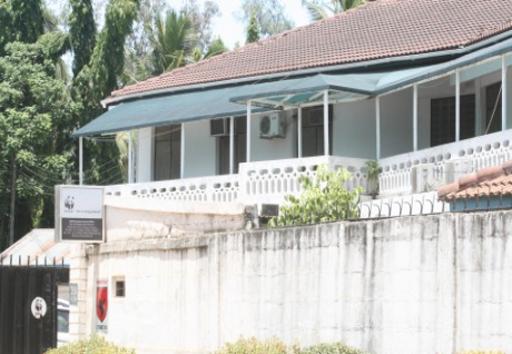 Despite its interest in such matters, and its concerns about third-world corruption, strangely absent from the pages of The Guardian is the recent news of what appears to be a major embezzlement scandal involving the WWF in Tanzania (pic - the air conditioned offices in Dar es Salaam).

Approximately $1.3 million in cash seems to have gone missing from a project called "Strengthening Capacity of Environmental Civil Society Organisations". Overall, it was worth about $4.5 million, part-funded by Norway. Further funding has been suspended for this and for the $2.5-million REDD+ readiness project, aimed at "enhancing Tanzania's capacity to deliver data on forest carbon stocks", has also been put on hold.

As the news of the scandal emerged, WWF's Tanzania country director, Stephen Mariki, resigned and, so far, the eight people linked to the fraud have had their employment terminated.

This is not the first time the REDD+ project has attracted unfavourable publicity, with reports last November, with complaints of evictions and that paddy rice farm huts had been torched and coconut trees felled in the Rufiji Delta mangrove forest reserve, where WWF has been operating.

WWF are seeking to reduce dependence on rice farming in the mangrove forest reserve and are encouraging Rufiji Delta communities and earn their living by other means, with the support of REDD payments.

The pair have said that stopping the local tribes from cultivating in the delta is counterproductive, and censures WWF researchers and government authorities for trying to stop them from surviving by using resources in the delta despite their existence for centuries.

In the currently scandal, an external auditing firm, Ernst & Young, has been brought in to carry out a detailed audit and investigation of the projects, and WWF has undertaken to pay back to the government of Norway any funds that have disappeared.

The Ernst & Young report was supposed to have been released by mid-February, but no details have so far been announced even though it is said that Britain's Department for International Development (DFID) is eagerly awaiting the outcome.

Britain, through WWF UK, are the main sponsors of WWF Tanzania whose patron is Prince Charles. DFID works with WWF UK "to provide flexible and strategic funding for development work across the world". It is in close contact with the Royal Norwegian Embassy on the issue.