Listen to this man! 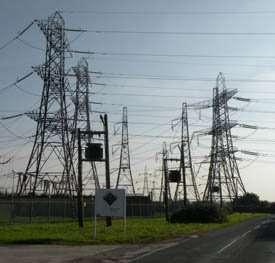 In The Daily Telegraph letters today (no link) you will find Mr J.C. Hodee of Newport, Pembrokeshire, under the heading: "Why years of power cuts are certain to come." Sir, he writes:

The design life of our major power stations is 35 years and nearly all are near to this or have exceeded it.

As a former consulting engineer for major power plant construction, I know that the minimum time in this country to plan, design, construct and reliably commission a base-load fossil fuel power station is five years and 10 years for a nuclear station.

This, of course, is without the interference of disruptive groups.

We are in for several years of progressively severe load shedding and power failures, owing to the dismemberment by the Tories of the Central Electricity Generating Board and subsequent lack of forward planning by the Labour Government and the foreign companies that now own our power generating and distribution system.

Have no doubt about it, the situation is serious, and the recent ill-conceived collusion with the French will do little to alleviate the problem.

This is no more or less than we have heard from any number of experts, the issue having been rehearsed endlessly on this blog. This is the voice of reality, not the posturings of the mad warmists predicting some vague disaster sometime in the future, sometime never.

We are going to get power cuts, unless we do something soon. The problem is already on us with the quota limitations on the coal-fired stations imposed by the EU's Large Combustion Plants Directive. Now, we know this is that nasty European Union and we don't like talking about it. But hiding your head under the covers won't make it go away!

I am old enough to remember the misery and uncertainty of Heath's three-day week and the constant power cuts. It was not fun, it was not an adventure. And this time it will be worse, not least because we are so much more reliant on electricity for our infrastructure. Cut the power to the computers which run the infrastructure of our nation and the nation stops functioning  period.

So, wake up children! The bogy man is coming and mummy won't be able to turn on the lights!