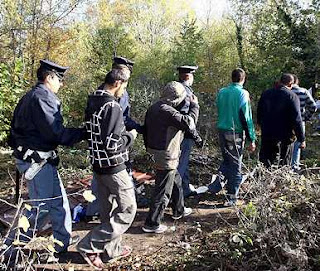 It appears that, if you want to drive a coach and horses through EU law, you must fulfil three essential conditions. Firstly, you must be the Italian government, secondly, you act against a friendless, largely penniless group of society  Romanian immigrants  and thirdly, you make sure you have the EU commissioner responsible for the law firmly on your side  i.e., Italian.

With those three conditions evidently in place, we learn from AP via the International Herald Tribune that the EU commission has refused to intervene in the Romanian mass expulsions, declaring that the Italian government has acted within its rights, passed an emergency decree to expel "European Union citizens" deemed dangerous to public safety.

The only note of caution expressed by commission spokesman for justice and home affairs, Friso Roscam Abbing (is he Italian as well?) was that the Italian law may only be used against individuals, not ethnic groups or nationals of any particular country.

Curiously, in affirming the rectitude of the Italian position, Mr Abbing seemed rather confused about EU law, stating that even though all EU citizens generally have the right to move freely within the 27 member nations and reside where they wish, they must still fulfil a number of conditions, including proof of sufficient income and health insurance so that they are not a burden on the host state.

What Abbing is doing is conflating three things, the right of free movement, the right of establishment, and the grounds for expulsion under EU law. Generally, the first freedom is unconditional. As our old friend Directive 2004/38/EC states, "Union citizens shall have the right of residence on the territory of another Member State for a period of up to three months without any conditions or any formalities other than the requirement to hold a valid identity card or passport".

For longer than three months, again the Directive applies, requiring immigrants to

But, here is the rub. Expulsion of Union citizens can only be authorised on "grounds of public policy, public security or public health". And, says the Directive, "These grounds shall not be invoked to serve economic ends".

Now, while the term "public policy" is deliciously ambiguous, there is no specific provision for expelling immigrants either for lack of health insurance or means of support. Thus, there seems to be an anomalous situation where a host country can refuse individuals the right of residence, but cannot expel them if they do not qualify.

That, though, is not the way the Commission sees it. Thus says Abbing, offering his own version of the Directive: "It is possible to expel citizens of another state if they don't fulfil the (residency) criteria or represent a threat to public safety or public health".

Needless to say, The Daily Mail is making merry with this statement, suggesting that this "will pile more pressure on Britain's immigration minister Liam Byrne, who has faced criticism for failing to act on his promise to introduce laws to 'automatically deport' foreign nationals who commit major crimes".

Mind you, the UK government seems to have found the answer to dealing with non-EU criminals crowding British jails. According to The Times, it is offering them £1,500 each to leave the country. Britons who get kicked out of jail, incidentally, get £46 and are prohibited from claiming benefit for two weeks after release.