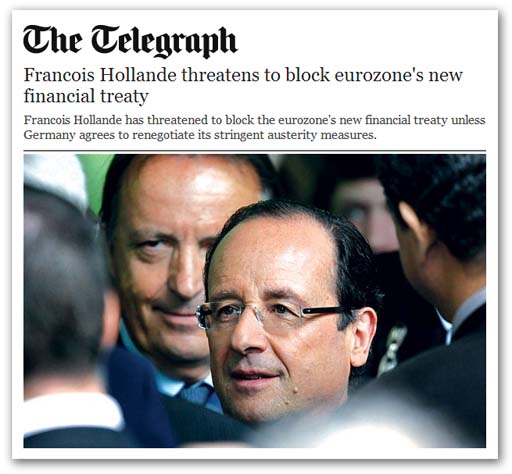 Bruno does a solid piece for this morning on the French side show, tracking Hollande's performances as he gets down to the business of presiding over his nation's failing economy.

On the face of it, I don't see any good reason to pull back from our earlier dismissive stance. A lot of this is political theatre, something which French presidents do extremely well, especially when newly in office.

Although they now wear clothes and stand upright, alpha-male politicians still feel the need to perform ritual boundary marking. The difference is that they now spray words rather than hormone-laden urine at the edges of their territory.

Supposedly on the agenda as a serious issue is the demand from Hollande, addressed notionally to the Germans, for a renegotiation of the fiscal compact. Ramping up the rhetoric, he is threatening to block the treaty unless he gets a watering down of the "stringent austerity measures".

The obliging Merkel is playing "bad cop" to Mr Hollande's "nice guy", giving him the opportunity to prance and posture, having his spokesman Benoît Hamon doing his ils ne passeront pas bit that plays so well with the French public.

"We want to renegotiate. Angela Merkel is defending her position but she cannot bypass the will of the French people", declares the Hamon. "If nothing moves, the treaty will not be submitted for ratification".

Part of the game, of course, is that everybody takes this theatre seriously, with the legacy media having to report it as if it was news, rather than as the marginally more sophisticated Punch and Judy show that it really is.

But when push comes to shove, Hollande doesn't really have a leg to stand on, and he knows it. Current analyses shows that public spending in Germany (2011 figures) is about 45 percent of GDP, against 56 percent in France.

If France would only follow the German example and drift its spending down by the ten percent difference, it could trim over €200 billion from the bottom line, cut taxes by €100 billion and still come out with a balanced budget.

Key to that would be to bring the public payroll down to the same levels, proportionately, as Germany – putting 1.5 million civil servants on the dole and slashing wages by 23 percent. That is the premium paid to French employees, over and above the levels paid to German officials.

Fashionable it is to take swipes at the "arrogance" of the Germans, when they are bankrolling the EU and holding the fort for the euro, only to have the French cream off the dividends, they do have a point.

According to the OECD, in 2009, 62 percent of the difference between German and French spending levels was due to the differential in pay and perks given to French public employees.

Not only are the wages, on average, 23 percent higher than German, Kermits enjoy a 35-hour week, costing €25 billion more than the German have to pay. Absenteeism is twice that of the private sector, at a cost of €12 billion.

Public sector pensions costs France €30 billion more than they do for the equivalent numbers in Germany. And right across the board, differences abound. By sector, French spending is higher than Germans in education (1.8 percent of GDP), health (1.4 percent), housing (1.3 percent), culture (one percent) and defence (0.7 percent).

Hollande, therefore, can dance and prance, telling us he wants to "reshape European construction toward growth". But this is for internal consumption. He is protecting a corrupt, featherbedded public sector that is draining the vitality from the French nation.

Doubtless, the Germans are fully aware of what is going on and will be singularly unimpressed. We have no reason to be any more impressed.