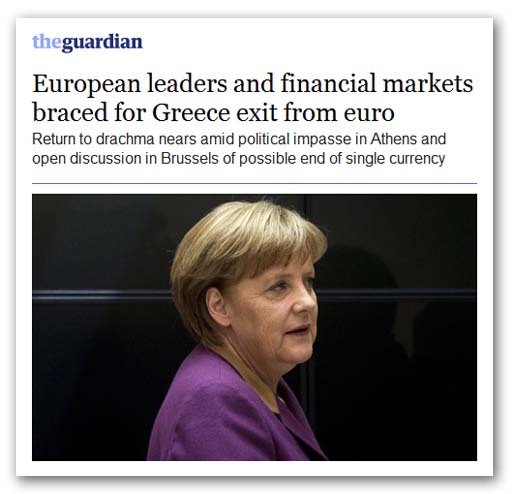 It struck me some time ago that the legacy media had lost the art of reporting the news, and were devoting their energies either to anticipating it, or trying to make it.
The former is very much what is happening in The Guardian and elsewhere, so much so that the news of actual events is being crowded out by the speculation – much of it ill-informed.

What one has to bear in mind though is that, over the next few weeks and months, billions and possibly trillions are at stake, with major losses or gains dependent on the decisions made by bankers, politicians and others.

The flow, management and control of information will be crucial to the results achieved and, in the way of things, those who know most will be saying least. That which they do say will be done for effect, with veracity and openness well down the batting order.

Few, if any, will have perfect knowledge, by no means all will necessarily understand what they learn. Many will react inadequately, wrongly or tardily to the information that does come their way. Some information emerging will be correct, some will be distorted, and much will be wrong – some deliberately so.

Market data, of course, tells you what has happened – and for reasons not necessarily related to headline events. They are reactive, rather than predictive, and traders are not necessarily well informed, especially when issues are tainted by politics, of which very few have a good understanding.

Yet, despite all this, there are some certainties. One is that Greece is going to drop out of the euro. Another is that there is going to be a rush of ill-informed commentary, and the noise level is going to be so high that it is going to be exceedingly difficult to work out what exactly is happening.

But one other thing is also certain. Greece is not going to be thrown out of the euro. We've been there before. There is no provision within the treaties to expel a member from the single currency, which is why the pressure was on Greece a few months ago to encourage it to leave – an "assisted" rather than an enforced exit.

Without a government, though, the actions of the Greek authorities will be hard to assess, and we may misread or misunderstand some of the signs coming out of that country – to say nothing of Brussels, Frankfurt, Berlin, Paris and London.

And so that brings us to one other certainty - the only one that is absolutely certain. In a very Chinese sense, we are living in interesting times.