Obama on the euro: more of a whimper than a roar 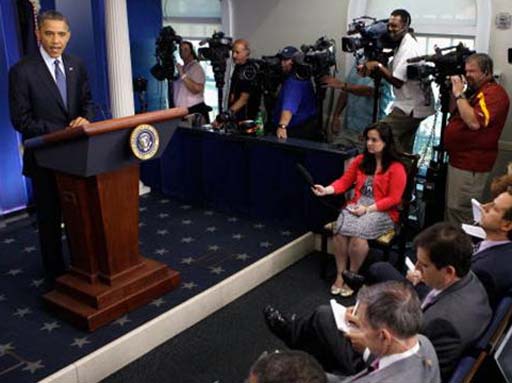 "Europe's economic crisis could send shock waves roaring across the Atlantic that would drag down the fragile US economy and threaten President Barack Obama's hopes for a second term".

That's the lead paragraph from Associated Press, which reports "the president demonstrating just how deeply he's worried about that — and how little he can do to prevent it".

Powerless to take on the economic mess overseas by himself, Obama, we are told, "tried to show Americans he was nonetheless engaged in trying to help by offering ideas and advice. At the same time, he was sending a message to his European peers to be resolute and move firmly".

"Now, the good news is there is a path out of this challenge", Obama said. "These decisions are fundamentally in the hands of Europe's leaders, and, fortunately, they understand the seriousness of the situation and the urgent need to act".

Almost in the realm of "the solution is simple, something must be done", the president's intervention even extended to urging that Greece should stay in the eurozone, arguing that "hardships will likely be worse" if it leaves.

One is, of course, tempted to remark that Obama might be better off sorting his problems out at home, before taking it upon himself to instruct the "Europeans". On reflection, though, they deserve each other.

The man says the US will "support Europe as it implemented the hard solutions needed to solve the ongoing debt crisis", which means that he too is mortgaging the future – if he means what he says, which is unlikely.

However, the comments will not be seen as support for the embattled Mrs Merkel. In a scarcely veiled rebuff to her austerity programme, he declared: "If you are engaging in austerity too quickly, it makes it harder to pay off your debts. Markets respond ... if you’re contracting, they bet you’re not going to pay off your debts".

The message then was that a proper plan for growth was needed, something which will do doubt please M. Hollande – a nice little present for his Sunday elections. Whether Spain will be as appreciative remains to be seen, as the weekend offers no respite from the crisis.

And as that crisis further intensifies, Obama's words may well come to be seen as a whimper from the edges, rather than the roar of the leader of the most powerful nation on earth.