Climate change: getting it spectacularly wrong 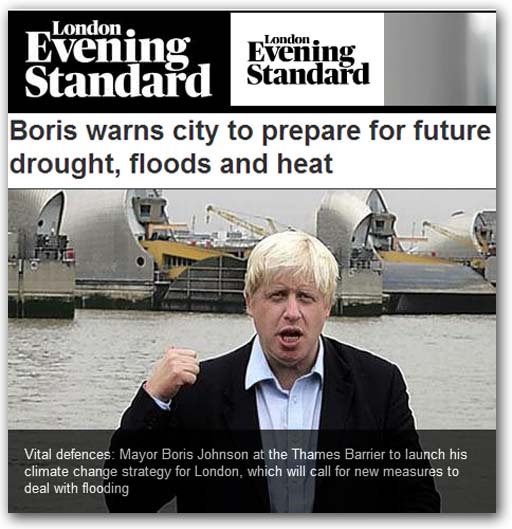 Floods, heatwaves and drought could cause a virtual collapse of the capital unless action is taken to address climate change, Boris Johnson warned on 29 August 2008. Then, he was launching London's Climate Change Adaptation Strategy, parroting the phrasing of the warmists, telling us that global warming would affect all Londoners.
"For London, scientists currently forecast warmer, wetter winters and hotter drier summers, coupled with an increase in the frequency of extreme weather and rising sea levels", he said.

Four years later, we have had the exact opposite  a cold, dry winter and a cool summer, with torrential rain. The forecasters could not be more wrong if they tried  which makes Boris Johnson and all the other fellow travellers dead wrong.

You will, however, get no apologies from Johnson and his ilk  still less the WWF which issued its own Thames Vulnerability Assessment Report report in July 2008, showing "that climate change is likely to result in hotter, drier summers and warmer, wetter winters". It must be really nice being a politicians or a greenie. It means never having to say you are sorry.