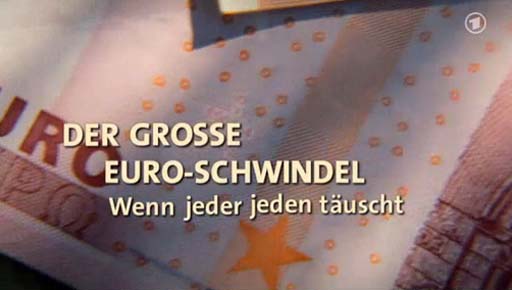 The German ARD television station last night had a very interesting documentary entitled The Great Euro Swindle, reconstructing how Europe's politicians deceived each other over the euro.
The euro crisis, we are told, is a story of fraud and deception - all members, even the Germans, are implicated.

According to our informant, it shows that Bundesbank (Tietmeyer, Issing) warned Kohl and Waigel that Italy and Belgium were not in compliance with the rules of EMU. Also Regling as director general in the EU commission knew about this. There were interviews with those bitter old men.

When Greek wanted to join the euro, the analysts Bundesbank could see that the data were apparently falsified. One member of the Bundesbank board went public but, as a result, got a severe dressing down from Hans Eichel.

Then Eichel and Schröder decided that Germany also would be in non compliance with the rules. Senior officials in Bundesbank and the leading politicians thus deliberately told lies to the population, who now must foot the bill.

A programme of this nature should have been dynamite in the German political debate, except for the fact that it was broadcast late, between 22.45-23.30 local time. Today's newspapers have not (so far) commented on programme.

If there are any public-spirited German speakers out there, we could really use a translation of the key parts, to give this wider circulation, not least to make the contrast with Peston's weak documentary.