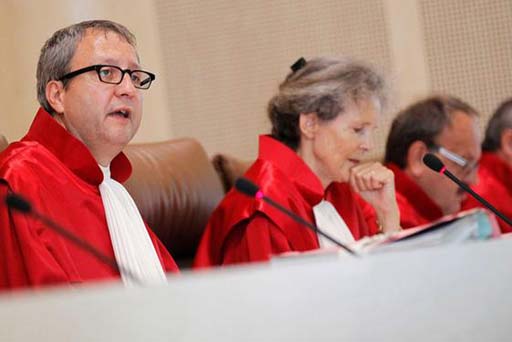 I seem to have got it into my head that the German constitutional court was going to make a ruling on the ESM and fiscal pact yesterday. One quite often picks up wrong impressions and, unless they are corrected, it is possible to remain misinformed for ever more.

However, on this occasion, I was not that wrong. On 2 July, Spiegel was reporting that the plaintiffs, who opposed Germany transferring more power to European institutions, were trying to obtain a temporary injunction against the two laws to stop them entering into force.

This would last until the court had addressed the main complaints against the measures at a later date and ruled whether the laws in question were constitutional.

It was highly unusual, said Spiegel, for the court to hold a hearing on requests for a temporary injunction. The fact that it was doing so is regarded as a sign of the importance of the issue.

All that now seems to have gone by the board, unless I have missed something. But, it is most certainly the case that the court in Karlruhe had a hearing on the ESM and fiscal pact yesterday. But, as Deutsche Welle now reports, it may be some time before we get a ruling. The judges may delay their decision until the autumn.

Originally, the decision as to whether the ESM and the proposed fiscal pact on national budgets were contrary to the German constitution was expected by the end of July, and finance minister Schäuble has been before the court to warn that delay could trigger "massive uncertainty on the markets" and "significant economic distortions".

The judges, however, seemed distinctly underwhelmed by this warning, with court president Andreas Voßkuhle sticking to the German constitution, loftily declaring that: "It is the task of constitutional courts to uphold rules even in cases when that is not politically opportune".

It is that attitude which has made him so popular with the political classes (not), but the man is obviously not going to be moved from his intention of carrying out a "very thorough examination" of the issues. And, like it or not, we are all going to have to wait until he has finished.

So significant is this that we even get a report in the Daily Wail, which gives details of Schäuble's warning. Ambrose, who has been consistently following this issue, also writes in detail, adding further colour to the reports.

Where we go from here is anyone's guess, but we have just seen another layer of uncertainty and complexity added to a situation which is already intolerably uncertain and complex. One really does wonder how much more of this the system can take, before it falls apart.