EU referendum: just suppose we got one: Part II 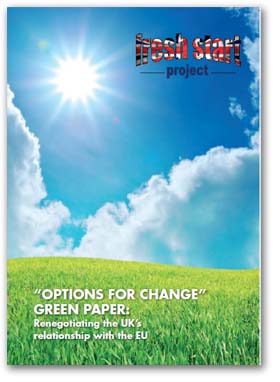 So, the great day comes, the polls are open and referendum arrives. The choice has to be made. But what will be on offer?
If David Cameron has managed the situation to his own satisfaction, then he will be giving us a re-run of the 1975 election: on the one hand we can have a "new deal" based on renegotiations with the "colleagues" and, on the other, the option of leaving the EU.

That this might be the plan is suggested by a piece from Mats Persson, director of Open Europe who is busily trying to convince us that there is a middle way between "certain europhiles and eurosceptics".

Notwithstanding Open Europe is firmly in the europhile camp, Persson asserts that both groups say that renegotiating new EU membership terms for Britain is impossible: one group because it thinks the status quo in Europe should prevail, the other because it thinks the UK should leave the EU altogether.

Persson, though, knows better than everybody else. We can, he says, take a "pick and mix" approach, retaining Britain's opt-in arrangement on EU policing laws, while participating in a better-targeted EU budget and some environmental measures.

And how do we achieve all this?

Well, the clever Mr Persson says he has the answers. As "Europe" goes through profound political changes in the wake of the crisis, Britain will have plenty of opportunities to advance this position, including in budget talks and future treaty negotiations, over which it will have vetoes.

And once new terms have been agreed, they could confidently be put to the electorate in a referendum.

We are, therefore, back in "handbag" territory, where we block the multi-annual budget agreement in return for some favours. Then we hijack some passing IGCs: the "colleagues" either agree to our demands or we veto the treaties they feel they need to save the eurozone.

The thing about people like Persson and his allies is that they live in their own bubble, immune from debate or contrary views. Ex cathedra assertions pour from their keyboards, without ever being tested, or even discussed. These are "good ideas", simply because they assert them. Everybody else is wrong.

In theory, of course, he could be right. The "colleagues" could roll over and give Cameron everything he asks for. On the other hand, they might simply decide to call his bluff, and dare him to block treaties which he agrees are necessary.

Either way, this is a risky affair – and one that has no certainty about it. But it does leave the way open to invoke Article 50 if the ploy fails.

Our point would be that the Open Europe ploy would most certainly fail, and if it did not, we would still be members of the EU. But, for Mr Cameron, his Conservative Party, Open Europe and the rest, that is the preferred outcome – they want to stay in the EU.

To help them on their way, Open Europe is relying on the recent Fresh Start initiative which has produced a 260-page document setting out some of the areas where powers could be clawed back.

This is not an exit plan, but a renegotiation plan. It is nevertheless a document of a substantial scale, and not entirely without merit. Something of the same scale, framed as an exit plan, should have been produced by UKIP, to demonstrate its serious intent.

Unfortunately, the "repeal the ECA" mantra exerts its malign effect here. The UKIP hierarchy simply does not believe that anything of this nature needed. It would repeal the ECA and negotiate a free-trade agreement. In their view, the party need to say nothing more.

The alternative, of course, would be point out that everything that could be negotiated from within the EU can be gained during exit negotiations, with the added benefit that we quit the EU. But, on this, the UKIP cupboard is bare.

Thus, as the battle lines firm up, the "renegotiators" are the ones looking prepared. They are showing up the empty rhetoric of UKIP, which has Mr Farage arguing that "renegotiation is an option but not a solution". For his own solution, however, he has nothing realistic on offer.

The party needs to realise that we will need a little more than rhetoric and You-Tube rants to prevail, but the UKIP hierarchy seems to think it can turn up with empty hands and even emptier minds. Someone needs to tell them this is not a winning strategy.