EU competences: the review to end all reviews 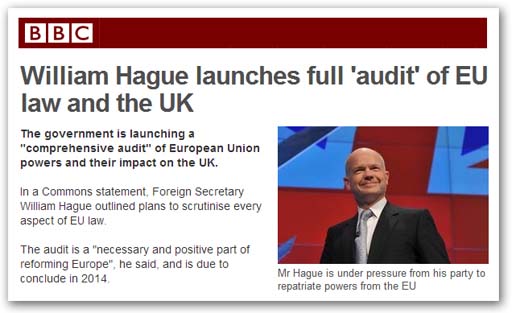 "Membership of the EU is in the UK's national interests", says William Hague, speaking in the House of Commons today. And, according to the BBC, this is his launch of a "full audit" of EU law and the UK.

With that opening though, no one could be under any illusion that this was in any way a prelude to Britain's departure from the EU. But, just in case anyone was under that illusion, Hague continued: "The Government are committed to playing a leading role in the EU", bizarrely then he also wanted to protect the UK's national democracy.

With that said, we then get the money quote: "the EU needs to reform to meet the challenges of competitiveness, a stable eurozone and greater democratic legitimacy".

When somebody comes up with drivel of this quality, there seems nowhere to go. Under normal circumstances, we would say that we are not dealing with a serious person, one who is of this world, one who is prepared to engage with other sentients in what is loosely called "dialogue". This is a missive from planet Zog.

Anyhow, to cut to the chase, things are not quite what they seem. This "full audit" of EU law and the UK has an official name. And no expense has been spared: it is a "Review of the Balance of Competences between the United Kingdom and the European Union", no less.

The twenty-four page document, though, gets you a repeat of the Zog missive and an executive summary. It is page twelve before we get past the propaganda and on to the meat. And meat it is - red, bloody and succulent.

"This is the right moment to examine the balance of the EU's existing competences", say Mr Hague's merry men in the FCO. "It is important that Britain has a clear sense of how our national interests interact with the EU's roles. It is good for the EU that its members debate honestly and openly how it functions and responds to the challenges it faces".

Zog, nevertheless, follows us into the pages of this document and it not until page 18, as the will to live is rapidly departing, that we finally find out what is going to happen.

Each Whitehall department will analyse the main EU treaty articles (and what they mean in terms of the split of competences between the UK and EU); the key ECJ case law and the major pieces of legislation applicable to the competence.

They will then examine how the scope of the competence has changed over time and the changes in the legislative procedures for adopting measures under the treaties (e.g. a move from consultation to co-decision or a move from unanimity to qualified majority voting).

Next on the list is to ascertain whether the UK enjoys any special status under the treaties in respect of the competences under examination and why EU-level action is thought the most appropriate.

Then, to conclude, we effectively get the much-vaunted cost-benefit analysis. Mr Hague's merry men are asking departments to find out how EU action in each field advantages and disadvantages the UK.

This is serious stuff. This review is to be government-led but, we are told, it will involve experts, organisations and individuals who wish to feed in their views on each issue.

Hague is saying that the audit will constitute "the most thorough and detailed analysis possible on the extent of EU powers", which will provide valuable evidence for policy-makers in the future.

If the rhetoric is any guide, he means what he is saying. The review document tells us the process will "be comprehensive, well-informed and analytical". Government departments will be tasked with consulting parliament and its committees, business, the devolved administrations, and civil society.

Furthermore, we learn, the progress of the review, including evidence submitted to it, will be transparent. And, just to make it fair, our European "partners" and the EU institutions will also be invited to contribute evidence to the review.

For such a comprehensive undertaking, we are also told that it will be important to allow enough time for this process to cover the necessary ground. Substantive consultation and reflection by Departments will begin in the autumn and reports on areas of competence will be published as the review progresses.

The review – a review to end all reviews - will conclude by the end of 2014. A final decision will be taken closer to the time on how to draw together the analysis produced during the review, "in the light of the EU's rapidly changing situation".

For once, it has been worth ploughing through the drivel. We have heavy metal on the move. This one is going to run and run.