Cameron: a "new settlement" with the EU 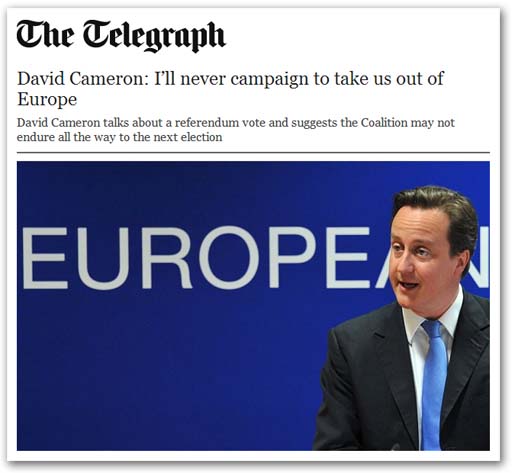 It hardly needed a soft-focus interview with the Failygraph to discover that David Cameron wants to negotiate a "new settlement" with the EU with powers returned to Britain.

He will not countenance leaving the EU and says he would never campaign for an "out" vote in a referendum. "I think it would be bad for Britain", he says:

When I look at what is in our national interest, we are not some country that looks in on ourself or retreats from the world. Britain’s interest – trading a vast share of our GDP – is to be in those markets. Not just buying, selling, investing, receiving investment but also helping to write the rules. If we were outside, we wouldn’t be able to do that.

Cameron adds: "It comes back to this, who are going to be the winning nations for the 21st century? If your vision of Britain was that we should just withdraw and become a sort of greater Switzerland, I think that would be a complete denial of our national interests".

Clearly, this man's idea of the national interest is very different from ours, and his idea that leaving the EU is retreating from the world  is nothing short of bizarre. It is interesting, however, how he picks up the meme raised by the Uncle Toms of Open Europe, citing the ability to help write the rules as one of the justifications for staying in the EU.

With that, however, we can make some pretty good guesses as to Cameron's EU strategy. With the help of the FCO, he intends to hold off any referendum decision until the EU Audit is ready by the end of 2014. Then, with the general election in the offing, one can expect some form of commitment to be included in the Tory election manifesto.

On the basis that the audit will find, on balance, that membership of the EU is "beneficial" but that there are a few issues where powers are "excessive", we can assume that the referendum will give a choice between renegotiation and withdrawal, to be held after the election.

Doubtless, Labour will follow suit, thereby taking "Europe" off the election agenda, allowing the politicians to concentrate on their preferred "schools 'n' hospitals" agenda. As always, the establishment will go to any lengths to "park" the EU issue, to avoid giving UKIP an edge.  This is the primary objective of the current strategy.

Following the election a new EU treaty may be on the table, which will also – most likely - require a referendum. And here, guessing gets difficult. One possibility is that Cameron will seek to combine the polls, asking for approval of the treaty, but making it conditional on the "colleagues" agreeing to negotiate. We can then expect a White Paper, couched in convoluted language, which will set out the UK "case".

Given "renegotiate or out" referendum, I would expect a strong majority for the "renegotiation" option. This, of course, would have been supported by all major political parties, the media and the establishment. An ad hoc "out" campaign will be heavily outgunned, with only a rump UKIP providing any political support.

The victory will then buy time for Mr Cameron, whence the FCO will go through the charade of a renegotiation, obtaining some meaningless and ultimately reversible "concessions". These will be trumpeted as a great victory and we will be on our way to a re-run of the 1975 referendum..

This underlines the fatuity of Farage's current tactics, causing some despair with Your Freedom and Ours. In the hands of its less than inspired leadership, UKIP stands to be completely outmanoeuvred.

The antidote, of course, is to make the case for precisely how damaging the EU is to the national interest, and to spread the message far and wide - pointing out the superficiality of the government case. We will do our best on this blog, and I am sure others will do likewise. With UKIP showing every sign of going AWOL, though, this is not going to be easy.

But then, as they say, if it was easy, everyone would be doing it.