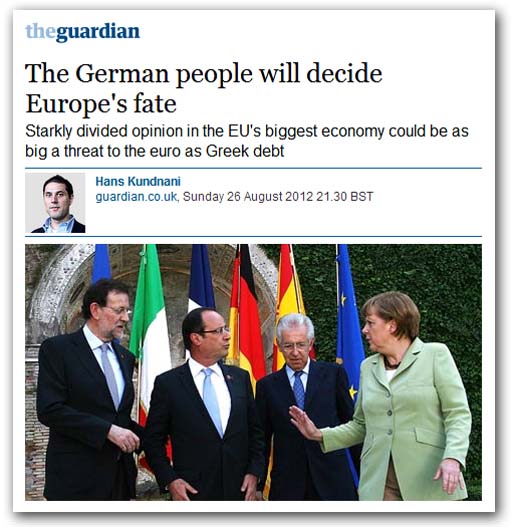 You might have thought that, with Merkel proposing that the December European Council set up an EU treaty convention, the British media – and especially the "right wing" press – would be all over the story. Not least, you might think, they would be focusing on the potential threat it represents to the eurosceptic movement.

However, more than 24 hours down the line - with even the Voice of Russia having published a piece - the only British newspaper which seems to have offered a full story is The Guardian. This is a piece by Hans Kundnani headed, "The German people will decide Europe's fate", with the strap: "Starkly divided opinion in the EU's biggest economy could be as big a threat to the euro as Greek debt".

We could hardly disagree with this view, reflecting as it does the Booker column of the Sunday before last (below), which in turn was built on our work on the blog in the preceding weeks, where we have been flagging up the prospect of a new EU treaty and discussing its implications.

Interestingly, the Irish Times also carries a report, but it is far more downbeat about the idea of a treaty, claiming a lukewarm response from the "colleagues", and Ireland in particular, to attempts to reopen EU treaties.

This paper cites as it authority, a reference to the original piece in Spiegel which has Westerwelle's "Future Group" unmoved by talk of treaty change.

However, that is not my reading of Westerwelle's inititative. While it is fair to say that the Group was focused on working within existing treaty structures, its interim report did not exclude "the option of more far-reaching reform measures in the medium term", such as treaty change.

Nor would it be wise to attribute this current initiative solely – or even – to Merkel. The idea of a new treaty has been a long time in the making, cooked up in its present form following the informal dinner on 23 May, when the "quartet" of EU presidents was set to work do devise a new treaty. What we are seeing is the next stage in this long-term "play".

For the moment, one must assume that the "colleagues" will be successful in their endeavours and that the December Council will approve the launch of a convention. One would not expect Merkel to lend her name to it unless it had a fair chance of success. And, with van Rompuy setting the agenda, chairing the meeting and "divining" the consensus, she can hardly lose.

As to the danger presented to the eurosceptic movement, we already touched on this in our earlier piece. The immediate problem is that it will enable Cameron in the general election campaign to "park" the EU as an issue which, as we have previously indicated, is always the political objective of all the main parties.
For the Tories, especially, though, a convention is the "get out of jail free" card which will allow then to make all sorts of promises that will help marginalise UKIP.

The essence here is that, while there are severe constraints for Britain in seeking to renegotiate new treaty terms in an IGC – pointed out during the Article 50 debate - in a treaty convention anything goes. Cameron and his team can grandstand to their hearts' content, putting up no end of proposals.

Doubtless, under these circumstances, concessions will be on offer – mainly to ensure free passage for the new treaty. Long after our general election is over, this will leave Cameron (or even Miliband) to grant a referendum to approve the treaty, supported by all main parties, the likes of Open Europe, Hannan and the europlastics, and the entire weight of the establishment and the British media.

In fact, what will be on offer may be very little different from what we have today – but with a huge raft out opt-outs which keep us clear of the political union running the eurozone, and some token concessions. Their importance will be grossly exaggerated, presenting the British public with the semblance of a victory, for which they will be asked to vote.

Against that will be a fragmented, disorganised and under-resourced "no campaign", trying to fend off accusations that it is seeking to rob Britain of its victory. It will be a very uneven contest.

Thus, the eurosceptic movement faces the distinct possibility of a nightmare scenario, a referendum which it cannot win, the loss of which will re-affirm the status quo for a generation or more.
Then there is the added irony that the only chance of restoring our liberties is through the German people. And, for reasons we will explain in a later post, they may not deliver.  If not, we stand at risk of being locked into the EU without hope of remission.
The existential crisis for the EU might be on its way to becoming an existential crisis for euroscepticism.