Eurocrash: one small step for the "colleagues" 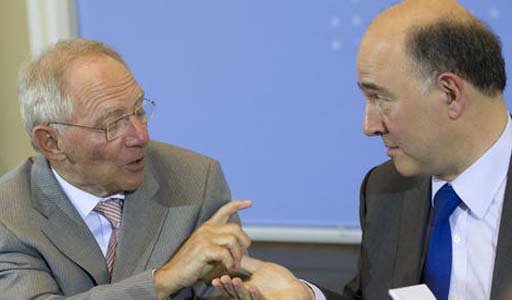 The immediate thought which comes to mind whenever one sees a German initiative in relation to the EU is "whither France?". Without the Franco-German motor of integration purring away, nothing serious is going to happen.
Then, via Handeslblatt, Reuters and others, up pops a report telling us that Schðuble and his French counterpart Pierre Moscovici (pictured) have met and are to coordinate eurozone proposals.

That must have been one of the items discussed when Merkel and Hollande met last Thursday, the upshot of which is that the finance ministries of Germany and France "will launch a working group with a view to making joint proposals on eurozone issues like fiscal and banking union".

Says Schðuble, "We will start in the next days and weeks a working group between our ministries to prepare forthcoming decisions in bilateral cooperation". The plan is to look at preparing joint proposals for the Eurogroup meetings of finance ministers, strengthening the fiscal and currency union and boosting eurozone growth.

Crucially, though, it will also coordinate on decisions taken by Merkel and Hollande, which effectively means that it is in the business of preparing for the December Council when the pitch is presented for an EU treaty convention.

The announcement of the working group, therefore, is tacit recognition that France has been brought into the picture. And while France and Germany may not be in total accord, the launch of the group tends to suggest that there is no rooted French objection to the line being taken by Merkel.

In the way of things, when the Franco-German "motor" kicks into gear, things start to happen. There are still huge hurdles between plan and fruition, but the "colleagues" are that much closer to where they want to be than they were a week ago.