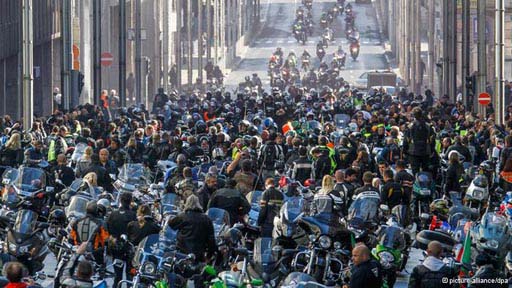 On Saturday last, according to reports, thousands of motorcyclists rolled into Brussels to protest against an "EU proposal" for regular mandatory bike inspections (pictured above). The law would be "expensive and useless," they said.

Thus, while representatives from the Federation of European Motorcyclists' Association (FEMA) met with EU officials, more than 4,500 motorcycles roared through the city's streets, protesting against a proposed law that would introduce mandatory EU-wide road-worthiness tests for motorcycles.
However, we are told that the talks didn't change the officials minds, leaving the proposals – which also affect four-wheel vehicles - unchanged.

And that, of course, was always pre-ordained. The new law has been on the stocks since the spring of 2004, when CITA was awarded a contract code-named "Autofore", the "Study on the Future Options for Roadworthiness Enforcement in the European Union".

However, while the new rules bears an EU label, they are not an EU initiative. The driver for change actually comes from UNECE, which co-ordinates regional transport safety rules. In this case, the EU testing regime is in fact implementing the "Vehicle Inspection Agreement ", agreed in Vienna on 13 November 1997.

Even had EU officials wanted to respond to the motorcyclists (and other motorists), therefore, they could not have done so. They are bound by a higher power, acting on the global stage – responding to the shadowy global power being constructed under the aegis of the United Nations and other bodies.

This is not the first time, by any means, that we have brought attention to this body, but even though it is hiding in plain sight, its existence and roles continue to remain obscure.

However, those who would complain about the action of the EU in this respect are really looking in the wrong direction. The European Union is only the subordinate power. Our real government in this case lies elsewhere. The motorcyclists weren't even protesting in the right country, much less the right city.