Media: taking in each other's washing

A fascinating insight into the way the press works comes with the sequella to an article in the Sunday Times dated 16 September (above), confidently proclaiming that there were only "100 adult cod in N Sea". There were fewer than 100 fully mature cod aged more than 13 left in the North Sea after decades of overfishing, the paper said, citing "government experts".

I did at the time think of writing a rebuttal piece to this (and in fact even made a start) but, on reflection, the headline was so obviously false that I didn't see the point in expending the energy.

However, the obvious falsehood did not deter The Daily Telegraph from copying out the story, publishing on its website on the same day, the headline: "Just 100 cod left in North Sea". And, where the Telegraph leads, the Daily Mail so often uncritically follows. The following day it ran the story under the headline: "Scientists fear for cod stocks as study reveals there are just 100 adult fish in the North Sea". 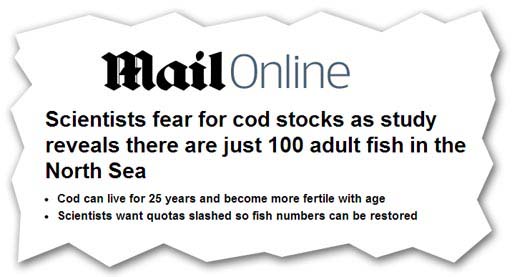 There, of course, you have the classic dog-whistle phrases, "scientists fear" and "study reveals", which is all the DM needs to make a story. It was matched by The Sun with the headline: "Good Cod!", telling us that "there are fewer than 100 mature cod left in the North Sea after years of overfishing, experts have warned". 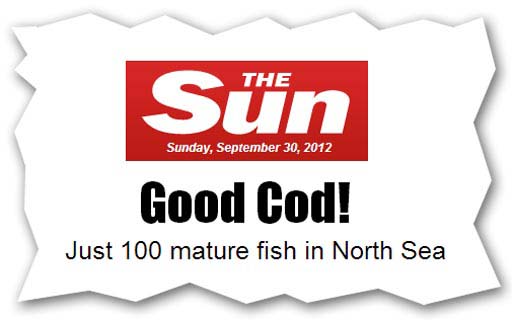 Of course, all these clever newspapers, with their skilled journalists and expensive fact-checking, couldn't possibly all be wrong … could they? Well, shortly thereafter, once Defra had issued a correction, there appeared an apology on the Sunday Times website, saying the headline over their article "over-simplifies a complex issue".

But it was more than just "over-simplification". The story was completely wrong, the ministry said. "In fact we know there to be around 21 million mature cod in the north sea. Cod start to mature from a year old and are fully mature at age six".  "There are a small number of cod over the age of 12 years old which has always been the case in the North Sea even when fished at lower levels in the 1950s and 1960s. Cod older than 15 have rarely been recorded in the North Sea", the ministry continued.

Even the BBC then got in on the act, writing a story about how the original story had been wrong. But, as always, it missed the point.

What shows up here is the sheep-like propensities of the media, and the derivative nature of their reporting. One newspaper publishes the report and the rest pile in, repeating the same inaccuracies and falsehoods without so much as a blush. And, if you are the Daily Mail, you don't even bother to issue a correction.

Of course, hundreds more media outlets repeated this original story, as thousands every day repeat agency copy and plagiarise each other's stories without even the slightest hint of fact-checking.

And mostly, right or wrong, the stories become part of the record, simply by dint of repetition by so many sources. Very few, like this one, are corrected. But it is good occasionally to have a fully documented example of the way the media takes in each other's washing, and so often gets it wrong in wholesale quantities.