Media: what else are they not telling us? 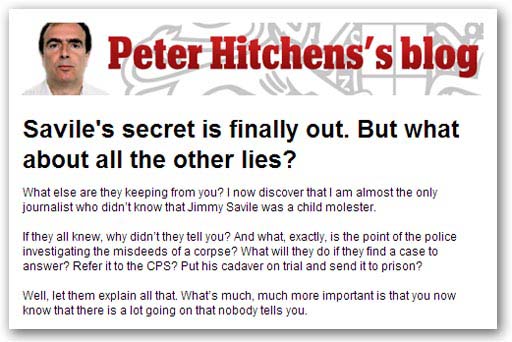 That is the theme of Peter Hitchens's blog today – on the back of the increasingly tawdry revelations about Jimmy Savile. Hitchens discovers that he was almost the only journalist who didn't know that this ghastly character was a child molester.  All the rest knew (or say they did).
From this stems that obvious question as to what else journalists are not telling us, and from that devolves the question as to why they are not telling us these things.

Hitchens suggests that the omerta owes much to our punitive libel laws, and there is some truth in that. But there is a great deal more to it than that, not least the sheep-like behaviour of the media pack, and the power of the narrative.

Too often, journalists (and their editors) want to stay in the comfort zone delineated by the herd. Once a "line" has been established (the narrative), they will not depart significantly from it. There is no need for censorship or libel laws here. This is what the media does to itself.

Unfortunately, this characteristic is reinforced by the public. People mostly favour coverage not for its factual content and accuracy, but for its entertainment value, and for its willingness to reinforce their prejudices and stay within their comfort zones. In short, the media prospers best when it tells people what they want to hear.

The great problem we have then is that the "first draft of history" often becomes the second, and third, incorporating all the errors, myths and lies in the original copy, unchecked and uncorrected. This becomes the perceived wisdom and truth never gets a look in.

To correct this is, of course, is why I wrote The Many Not The Few, and the extraordinarily hostile response from some quarters is easily explained by the fact that the book challenges the myths, and disturbs the equilibrium.

This is also why I am writing the "Shelter War" series on this blog, the fourth part of which I will attend to today. Our history defines who we are and it is vitally important that we get it right. I cannot allow the likes of Bognador and the Daily Mail to distort the record, without challenge - tiny though my voice might be by comparison.

With that, I'm warming to the idea of writing another book, perhaps called "The Shelter War". The true story of the Blitz, and the incompetence and heartless indifference of our authorities, has yet to be properly told. So many accounts are simply based on the media narrative of the time, with all their errors and distortions.

I must be mad even to contemplate this, though. The amount of work is totally disproportionate to the gain, and challenging the narrative simply ensures that the work – like this blog – will be steadfastly ignored by the "great and the good", and thereby by the public at large, which so often slavishly follows the lead of its "betters".

The only thing is that the "great", like Sir Jimmy Savile, are not at all good, their reputations reliant on the narratives which the media so assiduously create and protect. And as long as that is the case, deciding whether to tear down the walls isn't really an option. If you can do it, you have to do it.