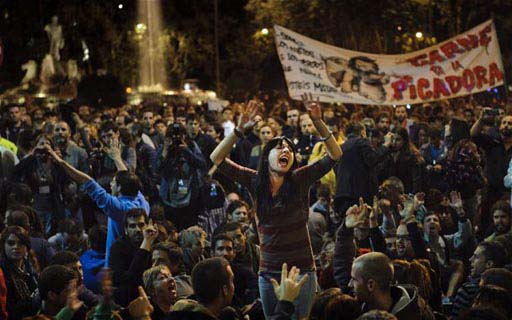 Ambrose is in full flight today, siding with the IMF in its apparent tiff with the "German-dominated" eurozone, thus declaring that "Lagarde has demolished the intellectual foundations of Europe's debt crisis strategy".

This is the headline battle between "growth" and "austerity", with AEP taking the line that drastic fiscal tightening in a string of interlinked countries, "pushed beyond the therapeutic dose, it is self-defeating". At a certain point, he says, "it becomes pain for pain's sake".
Personally, I take this spat as largely theatre. When the latest installment emerged last Thursday, you could see in it an attempt at market manipulation, in the run-up to the European Council later this week.  The "players" are staking their claims in public, ready to roll out for public consumption the "grand solution" over the weekend.

As for the substantive issue, if we were actually talking about properly functioning economies, Ambrose might have a point. But we are actually talking about Spain, Italy and Greece, three countries where corruption is the norm, where economic data would sweep the board at the Booker prize, if the nation reports were allowed entry, and where the real economies carry on regardless.

This is very much the case in Greece. Outside the two main cities  where the public sector has taken the brunt of the economic downturn  the real economy has been relatively untouched. Certainly, it is only in the cities that one sees the soup kitchens.
Under these circumstances, the "growth" that AEP wants to see  fuelled by an increase in debt, or a slowdown in repayments - is a strategy designed to support the status quo. In other words, it bolsters a corrupt system and keeps those responsible for it in power.

But what particularly grabbed me is Ambrose asserting that we "need a Churchillian figure" to raise the flag of defiance (to counter the "German" austerity programme), then wailing that "no such leader has yet appeared".

That Churchill was an economic illiterate, we can pass by, but what is so remarkable is this yearning for the "great leader"  no doubt to guide us to the "sunlit uplands" that the old fraud kept in his rhetorical toolkit.

The idea of looking for such a leader is embedded in the establishment psyche, and the need is assiduously promoted by The Powers That Be (TPTB). Yet, it is always the people who have to solve their own problems, after their leaders have made such a great mess of things.

What then happens, of course, is that the establishment then writes the history books, making out that the problems were actually solved by The Great Leader, for which they then claim the credit. As memories fade and the propaganda takes over, we then enter another phase of being sold down the river.

It is very much in the establishment interest to have us focused on the need for leadership, while the issues of power and responsibility are never addressed. Those in power never bear the personal consequences for their failures.  They take the glory (and the pensions), but never the pain.

Therein lies the Harrogate Agenda. What we are trying to do is re-make the link between power and responsibility. Those who have to suffer the consequences of them, should be those who make the final decisions. They are always the people.

The French had a phrase for it: sauve qui peut - save yourselves. And that does not mean bolstering the staus quo, giving the corrupt another chance. By the way, we still have a few spaces left for the Leamington Spa meeting. That is where we decide how we are going to take back our power.