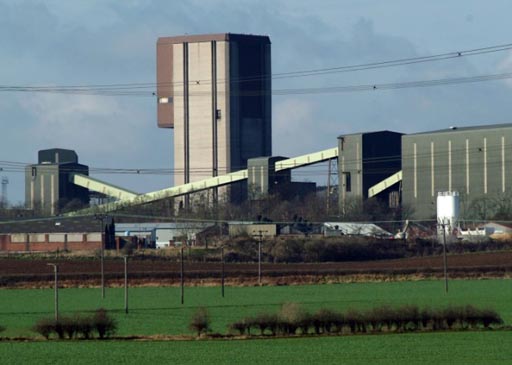 It is a measure of the decline of a once-great industry that a colleague of mine, on hearing that one of the last pits in Yorkshire is to close, remarked that he was not aware that we still had any pits in God's own country.
But first the BBC and then The Independent remind us of the presence of Maltby colliery near Rotherham in South Yorkshire  Dennis MacShane country  only to tell us that it is indeed going to close.

Hargreaves Services, which operates the pit - the scene of some of the biggest pickets in the 1980s strikes - says the it is no longer viable on safety, geological and financial grounds after producing coal for 104 years. About 540 staff were issued with redundancy notices last month.

This announcement adds to what is already considered a gloomy week for the mining industry, coming just two days after the Daw Mill mine in Warwickshire had its owners, UK Coal, take a move towards mothballing this operation.

At an emergency meeting on Monday, the Independent tells us, K Coal's shareholders voted through a range of measures in an attempt to rescue the struggling group, including splitting off the Saw Mill mine into a separate legal entity, which means it can no longer be subsidised by the group's other mines or its profitable property arm.

Once the country's most productive pit, Daw Mill, has been plagued by geological problems, and will now close by 2014 unless production rises and costs come down, putting 800 jobs at risk.

The fate of Maltby and Daw Mill are setting the seal on an industry that has been terminal decline since the Thatcher years. In 1913, it delivered 292 million ton of coal and, although by the time of its nationalisation in 1947, annual production had declined to 200 million tons from 1,038 mines, by 1983 its output was already down to 120.8 million tons from 308 mines.

However, that is by no means the whole picture as, according to government statistics, in 2011 UK coal production increased by 1.1 per cent on 2010. The increase, though, came from open cast mining, which produced 2.6 percent more, counteracting a decline in deep mined production of 1.1 percent.

Since 2005, nearly half of the UK's coal imports (mainly steam coal) have come from Russia, with Colombia, Australia, the USA and the Republic of South Africa being the other main suppliers. Russian alone supplied 9.8 million tons in 2010.

Demand for coal in 2011 was 52 million tonnes, showing little change on 2010 and, during the last ten years, over 80 percent of demand for coal has been from major power producers for electricity generation with around a further ten percent used for the manufacture of coke.

Now, we look to see a significant decline, as the EU's Large Combustion Plant Directive kicks in. By next March, five of our largest coal-fired plants, capable of supplying a fifth of our average power needs, are to be shut down.

With the hype about shale gas and the propaganda about wind and other renewables, we sometimes forget that Great Britain is still an island of coal and, Common Fisheries Policy notwithstanding, it is set amid a sea of fish. How remarkable it is that, in a world where 42 percent of electricity is still produced by burning coal, the British industry is in terminal decline.