EU Referendum: and yet another poll 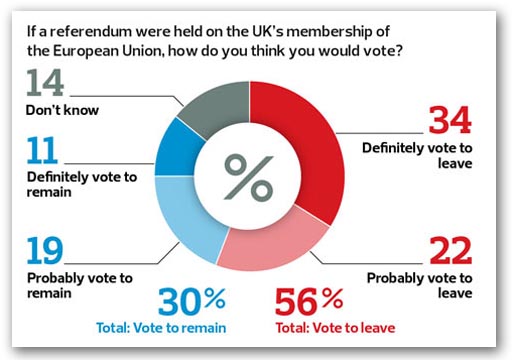 The Observer publishes a poll today on the EU, finding that 56 percent of respondents would "definitely" or "probably" vote to leave the EU in an election, compared with 30 percent who might vote to remain.

As an adjusted figure, removing the "don't knows" from the equation, that gives us a 65-35 percent split, giving the outers a 30 percent majority. That is slightly better than the last poll which gave us a 63-37 percent split and, while it is interesting, it is probably not yet sufficient to guarantee a win, should we be given an "on-out" choice. A margin of about 35 percent is probably the safe minimum.

Even then the figure is almost certainly very soft, as the bulk of the vote comes from the Conservatives. They split 68-24 percent in favour of leaving. Given an "renegotiation" option, this cohort would probably vote tribally, and given a Conservative government support for renegotiation, we could see the "out" vote collapse.

Nevertheless, the results are sufficient to invoke an editorial having the Observer squawking about the dangers of leaving.
A complete exit, it says, will be a disaster at every level. Britain's mass car industry would head to low-cost countries that have remained in the EU, and much other manufacturing, such as Airbus, would follow. The financial services industry would be regulated on terms set in Brussels and be powerless to resist.

British farmers, who had "prospered under the Common Agricultural Policy", would find "they become dependent on whatever mean-spirited British system of farm support that replaces it". Farms will survive by industrial farming, devastating the beloved English countryside.

Tax avoidance and evasion would reach crippling levels as our economy becomes increasingly wholly owned by foreign multinationals that make tax avoidance in Britain central to their business strategy.

This is very useful as an indicator of what sort of propaganda we might expect from the europhiles, and Readwald offers some counter-arguments. However, while some of the europhile claims are indeed nonsense, for a variety of technical reasons, our manufacturing output could be hard hit if we failed to negotiate a sound exit agreement.

This is why, of course, it is vital to promote a negotiated exit based on an Article 50 settlement, tied in with membership of the EEA and the nationalisation of all unadopted EU law and secondary treaties. That way, we can affirm that the day after leaving the EU nothing will have changed.

The main effect our departure would (and should) be to allow us to commence the careful process of transition from being an EU member to full independence – and also to work towards more democratic governance in the UK.

Thus, if the europhiles are going to work on the fear factor, we have all the answers. Given a hearing, we can reassure people that there is no down-side to leaving. But, we are going to have to fight for that hearing, especially if any "no" campaign is hijacked by a "false flag" operation.

In this basis, we are thinking in terms of the Harrogate Agenda bidding to become the official "no" campaign leader, making sure that the fear factor is removed.