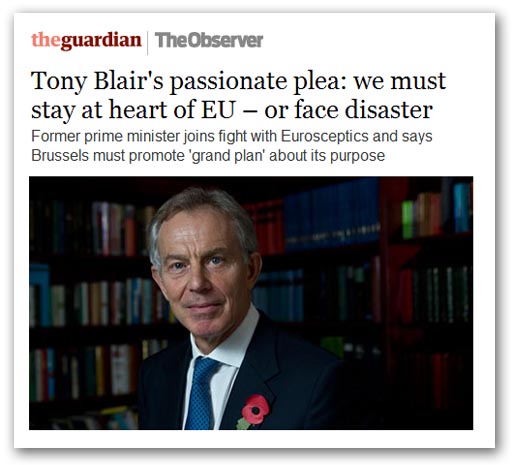 Andrew Grice in the europhiliac Independent is waking up to the threat posed to his darling EU, noting that, although none of the three main party leaders wants it, Britain could already be on a slippery slope leading out of the EU.

Then confronting the near-certainty of a referendum – although not just yet – he warns that, unless the pro-EU brigade is mobilised soon, its referendum campaign could be lost before it begins.

Cue the Observer seemingly responding to Grice's call, bearing a "passionate plea" from Tony Blair, who tells us that we must stay at heart of EU – or face disaster. Any disengagement from the European Union's "top table", he says, would be a disaster for the UK's economy and its power on the world stage.

That, then, is one leg of the europhile fight-back – the scare story. This will form the major thrust of their campaign, as they seek to influence the referendum and neutralise calls for EU withdrawal.

This adds to the Conservative tactic, which seeks to downplay the idea of withdrawal, focusing us instead on the non-existant renegotiation/repatriation option, with a little help from the Myrtle creature.

The third leg of the strategy now emerging, comes from the Labour stable, with the absurd Miliband taking the line of "reform". This he was parading on the Marr ego show this morning, and serves as his alternative to the Tory line.

Inbuilt in the Miliband pitch is also the scare element, which has him saying: "I will not let Britain sleepwalk towards exit from the European Union, because I think it will be bad for prosperity, it would hamper us in building the one nation economy I believe in … and above all it will be a betrayal of our national interest".

Note the almost Churchillian use of the first person singular, except that the old pretender tended to use the plural in times of peril, as in "we shall fight them on the Beeches" (or the Ash?) – something which is not quite as credible when you are saying, "We will not let Britain sleepwalk towards exit …".

So, there we see the three-legged strategy unfold – first, the "scare", then the two party-political alternatives: "renegotiation/repatriation" from the Tories, and "reform" from Labour. Anything will do to head off the idea of withdrawal.

Sadly, while the europhiles are beginning to get their acts together, much of the eurosceptic "community" is floundering, many still wedded to the Faragista fiction of a "quickie divorce". That, of course, positively invites a chaotic exit, and plays into the hands of the europhiles.

The antidote is an orderly, negotiated exit, membership of the Single Market through the EEA and the preservation of the status quo for an extended transitional period, achieved via Article 50. A trouble-free exit, by this route, neutralises the scare tactic.

The Miliband fantasy of "reform" scarcely needs dealing with, as the "colleagues" have their own ideas which do not include the UK. Cameron's "renegotiation" is slightly more problematic, but can also be neutralised by Article 50. To negotiate, one must first give notice of our intention to leave.

To suggest such, though, to bring out the "dog-whistle eurosceptics" who see in Article 50 some sort of devious plot to keep the UK "enslaved".

Given that we will at some time be confronting a referendum, and will find that the debate is already rigged by the government and the europhiles (if there is a difference), it will be a hard contest to win. We can really do without this eurosceptic rump that is determined to lose.