Water: cut out and keep

The Environment Agency, we are told, has said it is concerned about the prolonged nature of the heavy rain which has battered Gloucestershire this week.

The warning comes as the county is experiencing a further deluge of heavy rain, with the Met Office saying it will last until Sunday morning. The bad weather brings further risks of flooding, with rivers already badly swollen and fields saturated. Flood warnings remain in place for rivers including the Severn and Frome.

David Throup from, the Agency, says: "We need to be prepared for it because the water has nowhere to go now. "I suspect first of all it'll come on to the roads, we'll get a lot of surface water flooding again but at least it's during the quieter period. "Then the rivers are going to start reacting, first the small ones and now the River Severn is beginning to kick in because it's more than bank full". 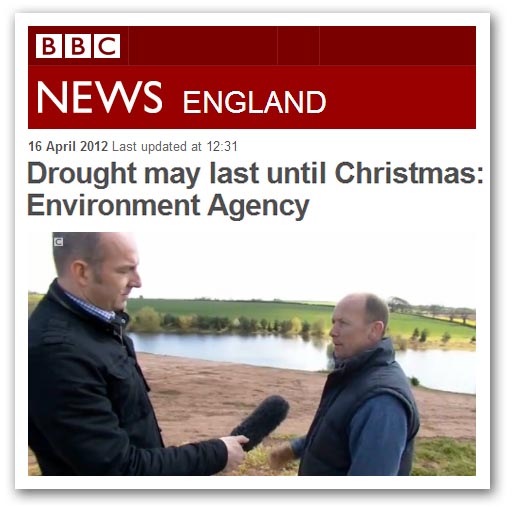 Just over seven months, ago, though, this same Environment Agency was telling us a different story. Head of water resources at the Environment Agency, Trevor Bishop, told us: "A longer-term drought, lasting until Christmas and perhaps beyond, now looks more likely".

He continued: "We are working with businesses, farmers and water companies to plan ahead to meet the challenges of a continued drought. While we've had some welcome rain recently, the problem has not gone away and we would urge everyone - right across the country - to use water wisely now, which will help to prevent more serious impacts next year". 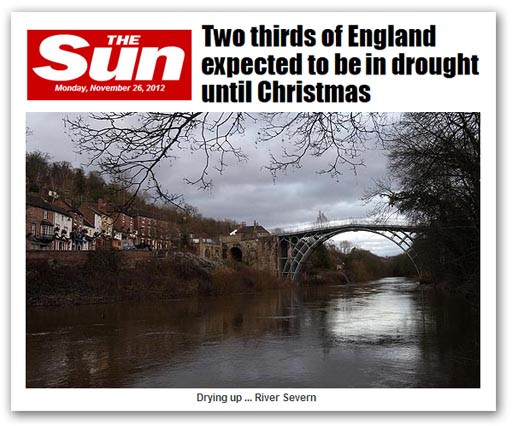 This was picked up, uncritically, by most newspapers, including The Sun. And all that goes to prove that what the experts say isn't necessarily true, and just because so many papers chose to print it doesn't make it true either.

With a Water Bill due next year, presaged on the idea that we are suffering from a water shortage, these reports are definitely ones to cut out and keep, particularly when the experts start pontificating about what we should be doing to preserve water supplies.

Already, we are seeing the dead hand of the water shortage agenda exert its malign force, as water companies forcibly introduce water meters, costing consumers up to Ł200 each, and paving the way for rationing by price, all to meet government targets of cutting water use from 148 to 130 litres per person per day by 2030. 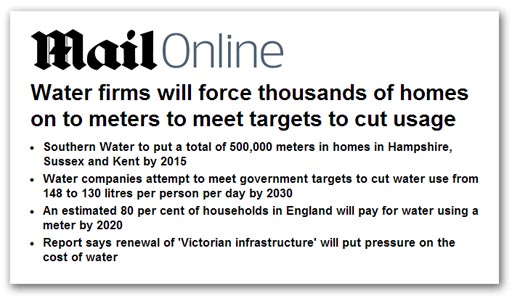 But how much this driven by the Green Agenda is evidenced this. The European Environment Agency (EEA), it says, has taken on the challenge to promote efficient water use in all sectors and at the same time "ensuring that ecosystems have the quantity and quality of water needed to function effectively".

This follows a principle of "decoupling natural resource use and environmental impacts from economic growth" established by United Nations Environment Programme (UNEP 2011).

But what is fascinating from the current BBC report on the flooding in Gloucestershire is that it pictures the "Horsbere Brook Flood Storage Area" helps to protect more than 350 homes from flooding. For "storage area", read "reservoir". Additional capacity serves not only to deal with drought, but can be used to contain excesses, thus reducing local flooding.

Still, though, the Green Agenda is distorting policy, cutting back the provision of reservoirs, all to satisfy the mythical creed of "sustainability". But, one might ask, how sustainable is the nationwide flooding that we were not, according to the "experts", supposed to be having.

But then, the Greens have no shame. The floods should be a "wake-up call on the need for urgent action" on climate change, Friends of the Earth says. The group's policy director, Criag Bennett, adds: "The government must show leadership and move quickly to slash UK emissions and help protect us all from the threat of increasing global climate change".

Just over a year, ago, though, the same Friends of the Earth were telling us that, "Minsters must act to ensure we change the way we use our water instead of wasting it". Low water flows, they said, "are implicated in damaging natural water systems. Without costly action these will get worse as climate change reduces water availability and population increases drive rising demand for water".

How quaint that, all seems now, as we were told to take shorter showers and turn off the tap when we cleaned our teeth". That'll sort it.