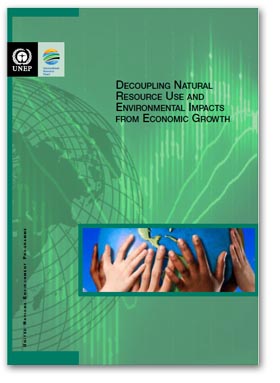 With the Leveson report about to dominate the headlines, the Government has chosen today, of all days, to publish its Energy Bill, thereby ensuring minimum scrutiny by a self-obsessed media. And such as is offered by the media will fail to recognise in the proposals the Green Agenda writ large, imbibing the Agenda 21 doctrines of "sustainability".

Thus, while an energy bill of the distant past might actually have concerned itself with ensuring that energy (and in particular electricity) production matched projected demand, dominating this Bill is exactly the same agenda that we have seen with water.

This follows the principle of "decoupling natural resource use and environmental impacts from economic growth" established by United Nations Environment Programme (UNEP 2011).

If you want a quick insight into the Bill, therefore, all you need to do is go to the report (illustrated above left), where "decoupling" is the new mantra. It is the foundation of energy secretary Ed Davey's proposals.

And if all that makes you wonder who is actually running the country, we can say with some confidence that it isn't our government – elected or otherwise. The reins of power, here, have been handed to the NWO Greens, who now scarcely bother to hide their malign presence.

Thus, the central ethos of the Bill is a determination to "slash demand for electricity", while almost trebling "investment" (and eventually consumer levies) on the grossly inefficient renewables, to Ł7.6 billion, up from Ł2.35 billion this year.

Overall, the inflated costs of renewing our electricity infrastructure have reached a projected Ł110 billion which, despite the extravagance, will not equip the supply industry actually to meet demand. Thus, the race is on to downsize demand, to match the designed-in inadequacies of the system.

Needless to say, this is going to cost us all a small fortune, but the Davey mantra, sold to him by the NWO Greens, is that there are compensating economies for hard-pressed consumers, gained from reducing consumption.

Perversely, this is probably right. Power cuts will become part of normal life, whence we save money by sitting in the cold and darkness, with the smart meters no longer turning.

For the electricity industry, as with the water barons, however, the Bill is pure delight. Under Government mandate, they will be able to charge more for less and be relieved of any obligation, statutory or otherwise, to meet demand or properly service their customers. From "customer is king", we move to a new era where the supplier is allowed to call the shots.

This is what we call the "Green Paradigm", where the responsibility for balancing supply with demand is shifted from the provider to the consumers, who are to be variously badgered, bullied, bribed and fined, in order to bring them into line.

All of this, of course, is to be buried in a welter of fluff, dissimulation, propaganda and lies, set to confuse the public into believing that this a benign policy under the control of ministers. Yet, all we have in Davey is a front man who, in the final analysis, is setting us on the path to economic ruin.

While "decoupling" is the current Green mantra, electricity consumption and economic prosperity are intimately and irrevocably linked. Reduce one and the other falls. But then, that always was the ultimate Green agenda, driving us back into the stone age.

How apposite it is, therefore, on a day when the media will be indulging in its own rituals of weeping and gnashing of teeth, plans are being published to rip from us all the very foundations of our way of life. Yet the media will scarcely notice, and most certainly will not understand what is going on.