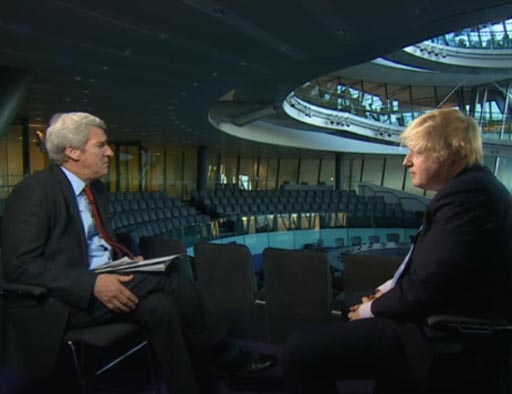 Paxman and others prattle about the European Union. Lacking imagination, intellect and understanding, a group of people rehearse arguments that have not progressed over decades. This is self-referential chatter that has nothing to do with ordinary people and has no relevance to them.

However, the BBC itself is incapable of breaking out of its own intellectual restraints and thus offers a sterile, shallow, superficial pastiche that resolves nothing (see, for instance @ 32.47). And if this is a sign of things to come, a referendum debate will leave the nation cold. There is no real debate … just noise.

But what comes over to the student of such events is the attempt, as always, to frame the debate. The telling point comes with Paxman interviewing that towering intellect Boris "Burbling" Johnson, telling us (@ 36.43): "the question would be either out or staying in within the EU but not part of the common agricultural policy, the common fisheries policy and one or two other things".

How we achieve this is, of course, not specified. It is never specified. We are not permitted to get to grips with that reality. All we get is the burble. The debate must be "framed", controlled, defined and neutralised.  We end up, as always, no further forward than when we started - and that is how they want it.