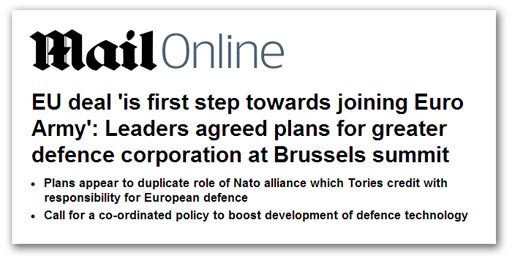 If the legacy media has any use at all, it is in providing a notice board, warning us of events which can then be explored further. Such a service is provided by today's Daily Mail, bringing to our attention remarks by the European Council on defence.

The one thing you cannot do though is trust the content – the sole utility is to point in the direction where additional or corroborating information can be found. In this case, the source is the European Council Conclusions which, according to the Mail have "European leaders" agreeing plans for greater defence co-operation, in a deal that is the "first step towards joining Euro Army".

These plans, we are told, "will force Britain to consult fellow EU nations over defence planning, with defence chiefs having to co-ordinate capabilities and procurement". And, such plans, we are further told, "appear to duplicate the role of the Nato alliance, which Tories have traditionally credited with sole responsibility for European defence".

Referring to the Conclusions, however, we find that the Council decided to "launch work on the further development of the EU's Common Security and Defence Policy and will return to this issue in December 2013", with the detailed text thus declaring:

The European Council invites the High Representative, notably through the European External Action Service and the European Defence Agency, as well as the Commission, all acting in accordance with their respective responsibilities and cooperating closely as required, to develop further proposals and actions to strengthen CSDP and improve the availability of the required civilian and military capabilities, and to report on such initiatives, at the latest by September 2013, with a view to the December 2013 European Council. Member States will be closely involved throughout this process.

The issues Council wants looked at include identifying current redundancies and capabilities shortfalls and prioritising future requirements for European civilian and military capabilities. It also wants to see proposals on "facilitating a more systematic and longer term European defence cooperation, including through 'pooling and sharing' of military capabilities".

When the Council then wants is further proposals on how member states should systematically consider cooperation from the outset in their national defence planning.

To flag up such issues is no bad thing, and it reminds us of the continuing, if so far largely thwarted ambitions of the EU to develop an autonomous military capability.

However, the gap between these Conclusions and the Mail report is huge. Far from actually "signing up to a blueprint for a Euro Army", as Cameron is accused of doing, all he has done is agree to the High Representative (aka Baroness Ashton) and others being asked to work up proposals on defence for delivery to the December 2013 Council.

Even then, implementation of any proposals will have to be through the "enhanced cooperation" procedure, of which the UK need not have any part and which requires unanimous agreement of all member states, including the UK . And then, if the UK did agree to take part, such a move would most certainly require a referendum under the European Act.

We cannot guess whether this is what Lord Justice Leveson means by the "powerful reputation for accuracy" enjoyed by mainstream journalists, but a non-technical description of the accuracy of this piece might include an eight-letter word beginning with "b" and ending in "s".

Clearly, though, there is something to watch, and a great deal to be concerned about. But this is far from the "first step" towards a Euro Army. This is a process that has been going on for decades, and for the Mail suddenly to wake up and then cry "wolf" is not terribly helpful.