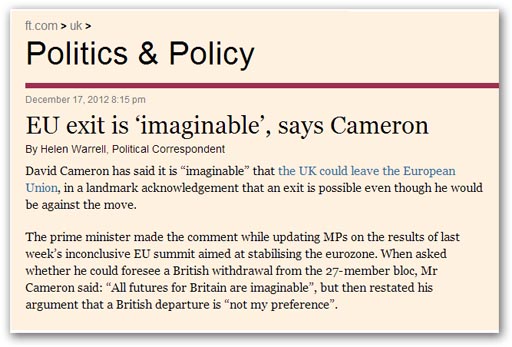 Thus does the Financial Times record that, slowly, gradually, David Cameron is being drawn down a path from which there is no escape. He has not arrived at the destination but we don't have so very far to go. The great problem is that none of us know what that destination is.
The loss-making Guardian notes this news, but carries some details of a poll commissioned by Lord Ashcroft. This research, which involved interviewing 20,066 adults last month, found that immigration was more important to people who were considering voting UKIP than Britain's relations with the EU. The research also found that half of all "UKIP considerers" had voted Tory in 2010.

The Ashcroft research is detailed here, where the great man himself writes. On the basis of his findings, he warns that twelve percent of those who voted Tory in 2010 now say they would vote UKIP in an election tomorrow.

Many, says Ashcroft, have suggested antidotes to the rise of UKIP. These usually flow from assumptions about what the attraction of UKIP actually is. Yet these assumptions are often mistaken. Remedies based on a misunderstanding of what pulls people to the party risk missing the target, or doing more harm than good.

His research, "the biggest ever survey of UKIP support and potential support", involving a poll of more than 20,000 people and fourteen focus groups with UKIP voters and "considerers" – defines the UKIP "temptation". Thus he tells us:

The single biggest misconception about the UKIP phenomenon is that it is all about policies: that potential UKIP voters are dissatisfied with another party’s policy in a particular area (usually Europe or immigration), prefer UKIP’s policy instead, and would return to their original party if only its original policy changed.

In fact, policies are secondary. Those who are attracted to UKIP are more preoccupied than most with immigration, and will occasionally complain about Britain's contribution to the EU or the international aid budget. But these are often part of a "greater dissatisfaction" with the way they see things going in Britain. From this, we see a litany of complaints:

All of these examples, real and imagined, were mentioned in focus groups by UKIP voters and "considerers" to make the point that the "mainstream" political parties are so in thrall to the prevailing culture of political correctness that they have ceased to represent the silent majority.

UKIP, for those who are attracted to it, may be the party that wants to leave the EU or toughen immigration but its primary attraction is that it will "say things that need to be said but others are scared to say".

From his data, Ashcroft concludes that the biggest predictor of whether a voter will consider UKIP is that they agree the party is "on the side of people like me". Agreement that UKIP shares their values and has its heart in the right place are also more important than policy issues in determining whether someone is drawn to the party.

The idea that UKIP "seem to want to take Britain back to a time when things were done more sensibly", and that "the bigger parties seem more interested in trendy nonsense than listening to ordinary people" both elicited stronger agreement among UKIP "considerers" than the party's policy that Britain should leave the EU.

Only just over a quarter of UKIP "considerers" put resolving Britain’s future relations with the EU among the top three issues facing Britain; only seven percent of them say it is the single most important issue. For them, it ranks behind economic growth, welfare, immigration and the deficit.

Perversely, just over a quarter of them say UKIP are the best party when it comes to defending Britain's interests in Europe; 42 percent actually name the Conservatives. Those who have already voted for UKIP in a general election are much more committed to EU withdrawal than those who are thinking of defecting from other parties.

What then comes over strongly is the observation that potential and actual UKIP voters are those who think Britain is changing for the worse. They are pessimistic, even fearful, and they want someone and something to blame. They do not think "mainstream" politicians are willing or able to keep their promises or change things for the better. UKIP, with its single unifying theory of what is wrong and how to put it right, has obvious attractions for them.

However, while many of those who are drawn to voting UKIP recognise the wilful simplicity of the party's rhetoric: that we could cut taxes, increase defence spending and balance the budget all at once, and cut crime and improve access to the NHS, if only we left EU and clamped down on immigration.

For some of them, though, this simplicity does not matter. They have effectively disengaged from the hard choices inherent in the democratic process, though they still want formally to take part in it. They say that being remote from power means UKIP can say what they really think, though there is a tacit acknowledgement that it also means they can say what they like and never be called on it.

Not only does it not matter that UKIP will not get the chance to deliver its policies, that is part of the attraction: their diagnosis cannot be gainsaid. Now that the Liberal Democrats have been exposed – and have exposed their supporters – to the realities of government, UKIP is the only party (at least this side of the Greens) by which nobody can feel let down.
This very much brings us to the crunch. An "in-out" referendum on the EU, according to Ashcroft, is not the answer to the question of how to win back potential UKIP defectors to the Tories. It may be the answer to a different question, but not to this one.

There are many good reasons for Britain to reconsider its relationship with Europe, he says. But if the Prime Minister decides to hold a referendum, it should not be with the aim of scuppering UKIP. For one thing, it would probably fail – Europe is only a small part of what attracts most people to the party.

The wider reasons, of values and outlook and general dissatisfaction with the direction of things, would still apply. "Europe" is much more of a preoccupation for the hard core of UKIP than for the party's potential converts. A referendum would be unlikely to win back the irreconcilables, and would fail to address the concerns of the persuadables.

Meanwhile, the voters the Tories need to attract from elsewhere would see the Conservative Party's agenda once again dominated by Europe – a subject which barely registers on their list of concerns.

Those who are open to persuasion, Ashcroft thus concludes, "can be won round by leadership from David Cameron (including continuing to develop a muscular approach in Europe), the assurance that we are delivering our promises on immigration, that welfare reform is both firm and fair, and evidence that the right decisions are being made on the economy".
Ultimately, we are told, "the battle between UKIP and the Conservatives is less about ideas, policies, or even values. It is a battle between the party of easy answers and the party of tough decisions. Those who want nothing but the former will not be persuaded. Those who want the latter need to be reassured that those decisions are right, and that they are bearing fruit".
So, is Ashcroft right? Editorial to follow.