EU politics: rolling out the scare 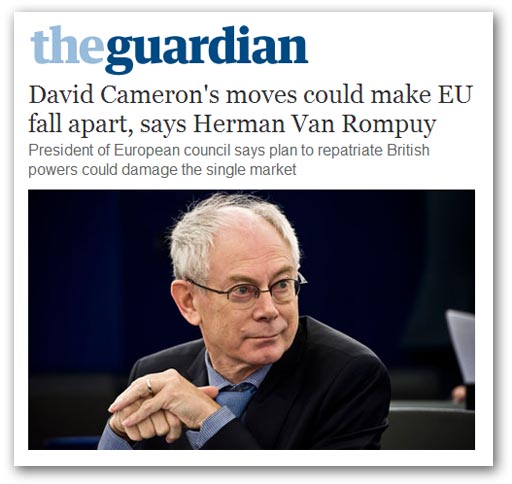 Yesterday it was Clegg in The Guardian "warning" that Britain must stay in "Europe" (he means the European Union, of course, but the lad is a bit thick). Today we have Van Rompuy telling us that the EU could fall apart if David Cameron seeks to claw back powers from Brussels.

A little while ago, we identified a three-legged europhile strategy - "renegotiation-reform-scare". The three legs are intended to blunt calls for a referendum or blur and confuse the issues so that any result is indecisive. And Van Rompuy is doing the scare bit for us.

All the same, there is probably a little more subtlety to his game, which is probably also designed to detach the UK from any potential allies. After all, if the core "colleagues" are seen to be picking on the UK, or driving Cameron into a corner, he will attract a sympathy vote. But if everything is sweetness and light, Cameron is positioned as the bad boy, "isolated" in Europe.

That suggests we can add another leg to the europhile tactics, making it a four-legged stool. We can even get a four-letter acronym out of it: "RRIS", even if the components are all rather familiar.

Wolfgang Schðuble, has also been recruited, to tell the Guardian that Britain would be shooting itself in the foot if a Cameron government second term resulted in the UK terminating more than 40 years of European membership.

The paper also has Robert Cooper, "a leading UK diplomat and until recently one of the EU's most senior foreign affairs officials", telling us that any British attempt to disentangle itself from the EU through "repatriating" powers from Brussels would generate great rancour and recrimination. Few policymakers in the EU would be willing to do Cameron any favours, resulting in an "enfeebled, lonelier" Britain.

There we have another of the classic "scare" ploy  we would be "enfeebled" and "lonelier". One weeps  but with boredom. Is this the best he can do?

Nevertheless, Cameron is being left with little room for manoeuvre. Van Rompuy highlights his problem, for any significant renegotiation would require a new treaty.

"The treaties allow a considerable degree of flexibility and much can be done without needing to amend them," says Van Pompuy. "It is perfectly possible to write all kinds of provisions into the treaties, but amending them is a lengthy and cumbersome procedure needing the unanimous agreement of every single member government and ratification".

On the other hand, there is europlastic Andrea Leadsom, front-lady for the thoroughly europhile Open Europe having her rather stale "Fresh Start" group promise next month to publish proposals for a renegotiation.

Leadsom is still locked into the idea that the "colleagues" will trade UK approval of "their" treaty changes for concessions on UK demands. But it is one thing adding more integration to a treaty built for integration. It is quite another reaching into it to break it apart.

And there lies the mountain Mr Cameron has to climb  he needs the unanimous agreement of every single EU member to bring home the renegotiation bacon, which he ain't going to get, while the fairy Leadsom is his ball and chain, bleating (if balls and chains can bleat) for the very thing that isn't on offer.

The way out for Mr Cameron is, of course, Article 50, but it will take more courage than he has ever shown to exercise that option. But when he finally realises he has nothing left, perhaps even he may see that this is his way out.