UKIP: not up to the job 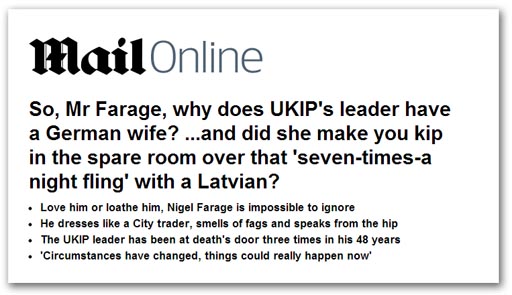 There is a tendency amongst some to regard UKIP as beyond criticism, displaying a sensitivity that is not extended to other political parties. That said, in any review of this latest piece in the Daily Mail, one must focus as much on the newspaper as its subject. This is the lowest possible grade of personality politics that does no-one any good.

One might thus question the judgement of Farage and his press team in allowing such a travesty to be published. It may play well with his fans, but its portrayal of Farage as the "Jack-the-lad" can do nothing to attract voters looking for a serious politician with workable policies.

However, even when the message is totally under the control of the party, as in this seasonal message on YouTube, we don't get a much more coherent picture. Farage, for instance, in a public utterance on Article 50, displays little of the tactical acumen than one needs of a successful party leader.

The test of this – and the evidence of failure - is in the way that the media, when looking for serious discussion on EU issues, tend to treat Open Europe as the "go-to team". Farage is "good for a larf", and jokes about "Latvian mistresses", but no one in their right mind would ask for his analysis on an EU exit plan.

For those of my readers who observe that I have "issues" with Farage should thus note that, in 1999, the objective for UKIP was to acquire a degree of gravitas that was hitherto lacking in the Party. Compare Farage's speeches then, with his most recent "rants" and the difference in strategy immediately becomes apparent.

The schism which then developed was entirely the result of differences in strategy. It became clear to some of us that, in order to progress the eurosceptic cause, we would need a structured, fully developed and realistic exit plan. But it was not to be. And now, when we so desperately need clear directions, Farage is interviewed about Latvians and Open Europe is asked about withdrawal options.

Sadly, the lesson Farage has never learnt is that it takes more than an affinity for booze, fags and wenches to get us out of the European Union. The British public will need good, hard reasons, and reassurance that withdrawal is feasible without causing irreparable damage to the economy and our international relations.

Therein lies the ultimate failure of UKIP. A political party must have a coherent vision and – expressed in modern parlance – a "route map". Furthermore, the vision must be a positive one, ideas that can offer people hope of a better world, in a way that captures the imagination. In these vital respects, UKIP has nothing to offer.

UKIP's absence from the field of battle, however, does not remove the need for both exit plan and a vision. But what the Daily Mail has done today is illustrate, unequivocally, that Farage is not up to the job of providing either. That, I suppose, is some small service.  Now we must press on without him.