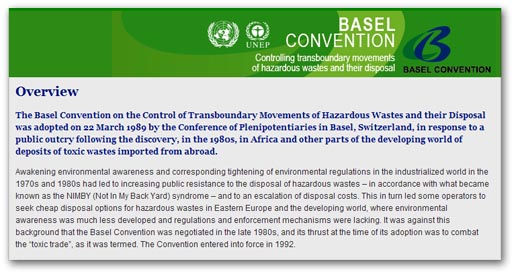 As Witterings from Witney picks up yet another example of the woeful state of ignorance on the status of Norway viz ŕ viz EU regulation, we have to confront the prospect that there is an alarming number of people who lack basic the understanding of how the global and regional regulatory system works.

It was suggested recently that we should provide some examples of how that system works, and with that in mind we offer the "Basel Convention on the Control of Transboundary Movements of Hazardous Wastes and their Disposal".

This provides a classic example of how Norway participates directly in the regulatory process, contradicting claims that this country is forced, by virtue of its membership of the EEA, to adopt legislation from the EU without taking part in framing it.

Starting with the convention, this was adopted on 22 March 1989 by the Conference of Plenipotentiaries in Basel, Switzerland, in response to a public outcry following the discovery, in the 1980s, in Africa and other parts of the developing world of deposits of toxic wastes imported from abroad.

Awakening environmental awareness and corresponding tightening of environmental regulations in the industrialised world in the 1970s and 1980s had led to increasing public resistance to the disposal of hazardous wastes – in accordance with what became known as the NIMBY (Not In My Back Yard) syndrome – and to an escalation of disposal costs.

This in turn had led some operators to seek cheap disposal options for hazardous wastes in Eastern Europe and the developing world, where environmental awareness was much less developed and regulations and enforcement mechanisms were lacking.

It was against this background that the Basel Convention was negotiated in the late 1980s, and its thrust at the time of its adoption was to combat the "toxic trade", as it was termed. The Convention entered into force in 1992.

Now the thing to note here was that Norway was a signatory to this Convention and took an active part in framing the regulatory provisions embodied in the convention. The Convention maintains a secretariat in Geneva and to this day, Norway maintains a liaison with it, through its permanent mission in the same city. 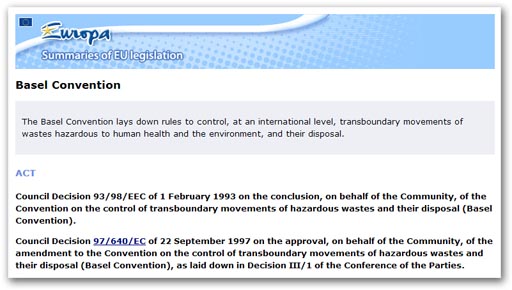 It is not recorded whether the Commission faxed the Regulation to Oslo, but like as not, then as now, it was available on the Internet. Either way, it would not have come as a surprise to the Norwegians who had been party to its origination. Latterly, the EU became a signatory to the Convention in its own right, which put it on a par with Norway, allowing it to sit at the same table.  Then, presumably, delegates could pass the documentation to each other by hand, after they had discussed them.

As to the original regulatory scheme, it was Norway, amongst others, which agreed the requirements, which were then processed into legislation for EU and EEA members. And, as we saw with the Convention on the Conservation of Antarctic Marine Living Resources, this is an important mechanism by which regulation is originated.

In no way, though, can Norway or other EFTA members be considered as passive recipients of EU legislation. That is not true now, and it never has been … and The Boiling Frog has even more.