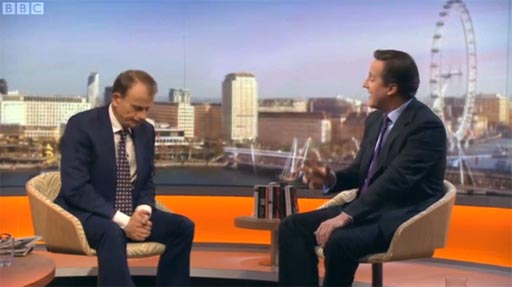 Andrew Marr interviews David Cameron on his show today. The EU section starts at 43.02.There is a lot to analyse, and I will add to this post as I bring together the different points made. The first of many to address though is the question put as to whether we should leave the EU.

Predictably, Cameron says it wouldn't be right for Britain. Asserting that fifty percent of our exports go to "Europe" (not strictly true, but we'll let that one pass), he then launches into his pre-prepared homily:

Because we're in this single market and have a seat at the table in the Single Market, we help write those rules. If we were outside the EU altogether, we'd still be trading with all these European countries … but we would have no say over the rules of the market into which we would sell.

On this matter, it would appear that there no shades of grey in Mr Cameron's world. We would have no say, he declares – not even "less" (which might be arguable, with difficulty), but none at all. By any measure, that is not true. It does not even begin to approach the truth.

Said intentionally to effect, with knowledge that it was false, Mr Cameron's statement would be a lie. If we are to give him the benefit of the doubt – although not quite in the sense that Mr Grayling means - we could probably surmise that he does not know how untrue his words are.
That, however, places a huge burden on his advisors and associates. If they don't know that the prime minister is misleading the public, they should. They should know, and are gravely derelict in not telling him.

Crucially, through their ignorance and negligence, we are now in a situation where the key points that underpin Mr Cameron's campaign are false. We can see the attraction and even the necessity these falsehoods to be projected, where membership of the EEA would completely undermine the attraction of staying within the EU. But the fact remains that his claims are false.

How interesting it is, therefore, that we were brought into the EEC on the basis of deception and now, forty years later as a new prime minister seeks to keep us in the EU, the deception continues. Mr Cameron should know, though, that we are not in a mood to be deceived.