Unable to fight his corner even on his own blog, after the assertions he made on Norway were challenged, Mats Persson of Open Europe has scuttled off to his Telegraph clog, repeating his propaganda in the hope of reaching a more gullible audience.

However, while desperate to support the Cameron line that Norway, within the EFTA/EEA matrix has "no say" over the framing of EU rules, Persson has been forced to concede that Norway does indeed have some input on the framing of laws. All he will grudgingly allow, though, is that "Oslo has exceptionally limited ability to influence them".

Interestingly, in support of this claim, Perrson cites EU labour laws, which Norway adopts, claiming that this fact supports his contention. But, as before, the real world calls him out as wrong – if not actually lying.

Part of the evidence rests in with one of Norway's key interests - shipping services. Here, on-board living conditions in sea-going vessels are a competition issue, with flagged vessels operating at low standards enjoying a cost advantage. Thus, as a means of implementing and enforcing international standards and thus levelling the "playing field", the EU in April 2009 promulgated Directive 2009/16/EC on port State control of shipping. This, inter alia, required member states to enforce the provisions of the Maritime Labour Convention, 2006, of the International Labour Organisation.

In the Directive, member states were asked to "make efforts to ratify, for the parts falling under Community competence, that Convention as soon as possible, preferably before 31 December 2010", and one could suppose that, since the text had "EEA relevance", Norway might have been expected to ratify the Convention as well – except that the EU was too late.

The reason for this, we see in an ILO press release of 10 February 2009, which tells us that Norway was the first European country to ratify the Convention – before even Directive 2009/16 was promulgated. 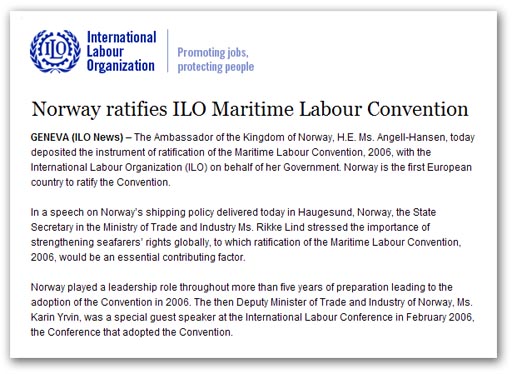 Further, from this press release, we find that, "Norway played a leadership role throughout more than five years of preparation leading to the adoption of the Convention in 2006". The then Deputy Minister of Trade and Industry of Norway, Ms. Karin Yrvin, was a special guest speaker at the International Labour Conference in February 2006, the Conference that adopted the Convention.

Norway, we are told, also played a key role in developing the international guidelines for flag State inspections and port State control officers carrying out inspections under the Maritime Labour Convention, 2006, that were adopted in September 2008 by a tripartite meeting of experts. Thus said ILO Director-General Juan Somavia:

Ratification by Norway of the Maritime Labour Convention, 2006, is significant in that it is the first European country to do so. Its ratification will give a strong signal to other European countries to continue their efforts towards ratification and promoting decent work in the shipping industry. The Convention marks a new departure in the pursuit of a fair globalisation by making the rules of the game fair for everybody.

One should note that Mats Persson addresses our arguments that, while Norway cannot vote on laws, it makes up for it by having a big say over the Commission when laws are prepared. "This", declares Persson, "is a ridiculous argument, as that influence amounts to peanuts".

Yet here we have an EU law, affecting a major sphere of Norwegian economic interest, and what do we find? Far from being the passive receiver, Norway is the acknowledged driver of the legislation, playing the "leadership role" in bringing it to fruition.

This is by no means the only example where Norway, acting though international organisations, plays a key role in framing legislation which is then adopted by the EU. Already, we have offered this and this, and there many more examples.

And what is particularly relevant to this discussion, is that Open Europe was specifically challenged to respond to these examples where Norway quite evidently punches above its weight, and exerts enormous influence on legislation, not only at a regional level but on a global stage.

It is flying under false colours.