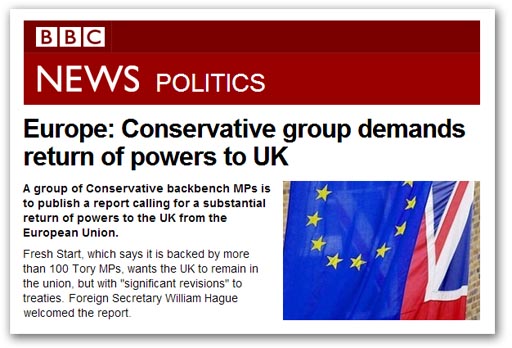 Its progenitors are calling themselves "Fresh Start". The original 260-page document, on which we reported last July, is trimmed down to a mere 40 pages, but the thinking has not changed.

Andrea Leadsom, one of the leaders of the group of MPs, tells the BBC's Daily Politics show that leaving the EU would be a "disaster" for the British economy but says she wants powers to be repatriated.

The BBC report tells us this is backed by 100 Conservative backbench MPs, and welcomed by Hague, but the thinking is stale, derivative and unrealistic. Nevertheless, Hague writes of the production, "It is a well-researched and well-considered document full of powerful ideas for Britain's future in Europe and, indeed, for Europe's future".

Actually, I can't be bothered with this.  It's not worth bothering with. This is "little England" playing on the fringes of "little Europe". There is a whole world out there, and they don't even know it exists. Intellectually, they are not even past first base.