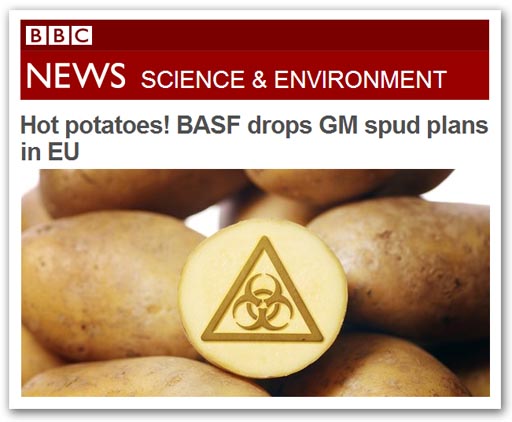 In the days when newspapers had specialist agriculture correspondents, the news the German chemicals giant BASF had dropped attempts to market genetically modified potato varieties in Europe might have merited more than a passing reference in an obscure corner of the BBC website, under a trivialising headline.

And had such correspondents been active, and those self-same newspapers still took any interest at all in agriculture, more than just the Guardian might have reported on the Oxford Farming Conference back in early January, a political highlight of the farming year which used to be widely reported in the popular media.

With the two events in the public domain, one or other of the correspondents  having the time and background knowledge to explore such things  might have linked the two reports and noticed a startling incongruity which has profound implications for the current (albeit lacklustre) debate on the European Union.

Crucial to this is that the star speaker at the Oxford Conference was Defra Secretary of State Owen Paterson, his first address at the Conference in his elevated role. And the link which screams out when you put the Guardian report side-by-side with the BASF news is that, on the one hand, you have Mr Paterson actively promoting the use of GM while, almost exactly a month later, we get a major player pulling out a key developmental sector.

"The British public should be persuaded of the benefits of genetically modified food", the Guardian report had Mr Paterson saying, making his statement, "a key signal of the government's intent to expand agricultural biotechnology and [to] make the case for GM food in Europe".

Ostensibly, therefore, we have a classic example of the impotence of a British minister in the face of a multinational company reluctant to pursue the technology he favours. And the reason in this instance is, according to the lamentably inaccurate BBC, that: "The genetically modified potato project gained approval at EU level but was a commercial failure".

This BBC report (by environment correspondent Matt McGrath) does not even begin to do justice to the issue. It presents a grossly distorted account of the situation, having omitted the all-important sentence in the original BASF press release (dated 29 January). This reads:

The company will also discontinue the pursuit of regulatory approvals for the Fortuna, Amadea, and Modena potato projects in Europe because continued investment cannot be justified due to uncertainty in the regulatory environment and threats of field destructions (my emphasis).

Field destructions have certainly been a factor in the ongoing struggle to gain wider use of GM crops, but there can be no doubt where the emphasis lies in the BASF press release. The main reason for them pulling out is, quite simply: "uncertainty in the regulatory environment".

Regular readers of this blog  who are far better informed on such issues than those who rely on the pap dished out by the legacy media  will be aware that approval of GM crops is an exclusive EU competence. Therefore "uncertainty in the regulatory environment" relates exclusively to implementation of EU law.

Furthermore, readers will also be aware that, applications for marketing approval of GM foods, if contested by Member States, go through the comitology process and that one of the BASF potato products suffered from this process in 2006 before it was finally approved in March 2010, after a delay of 13 years.

But, since BASF seems to have mastered the approvals process, and has achieved some success in have one of only two products (the other being GM maize) gain market authorisation, one might ask why the company has thrown in the towel after so much time and expense.

Part of the reason is undoubtedly due to the European Commission failing to enforce its own legislation. A weak Commission has allowed Member States to conduct what amounts to a low-level guerrilla war against GM, in a bid to prevent such crops being sown in their territories. Austria, Bulgaria, France, Germany, Greece, Hungary, Luxembourg and Poland have all used loopholes in the law to block its exploitation.

The key, though, is in the comitology process itself, and in particular the amendments brought in with the Lisbon Treaty. In an attempt to "democratise" the process, Articles 290 and 291 gave powers to the European Parliament to block, under certain circumstances, comitology decisions.

As a general rule, the European Parliament tends to be hostile to GM crops and the additional hurdle of gaining approval from this institution has clearly proved to be the last straw for BASF, as the chances of gaining approval for any new product under the amended regime is next to nil.

Thus, BASF cannot justify the investment in new products if there is no certainty that, at the end of the long and expensive approval process, there is no reasonable expectation of being given a market authorisation. It is thus pulling out of the European market for these products altogether, and concentrating on the US  an ironic situation for a company founded  and still headquartered  in Germany.

Under the original, "less democratic" comitology system, it was already virtually impossible for individual member states to influence the process, but under the new "democratic" system administered by an already strengthened European Parliament, it is beyond the reach of individual Member States  and reason.

Thus, we find that Owen Paterson, member of the British government, is powerless to intervene and promote the use of GM crops in the UK, even if that was the democratic will of the Westminster parliament and the entire nation. Still less is he able "to make the case for GM food in Europe". The Lisbon Treaty has put paid to that.

Piling irony on irony, however, latterly we have besieged by europhile scaremongering about the supposedly crippling "uncertainty" arising from Mr Cameron's referendum announcement, and its effect on the Single Market.

Yet the GM approval system is part of the Single Market, and it is the "uncertainty" in this regulatory environment that is causing a major player to desert Europe and concentrate on the United States. As so often, claimed effects and reality are opposites, not that you will ever learn this from the BBC.