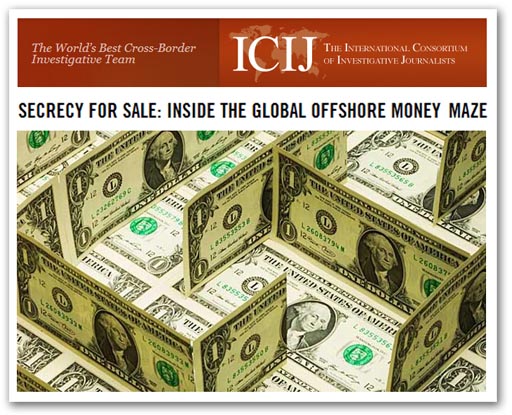 For the last few days in certain newspapers, the dominant story has been a collaborative affair, running under the general title of "Secrecy For Sale: Inside The Global Offshore Money Maze".

Styled as "one of the largest and most complex cross border investigative projects in journalism history", it is co-ordinated by the International Consortium of Investigative Journalists (ICIJ), working with more than 86 journalists in 46 countries in "an attempt to strip away the biggest mystery associated with tax havens: the owners of anonymous companies".

The exploration began when a computer hard drive packed with corporate data arrived in the post. Gerard Ryle, ICIJ's director, obtained the small black box as a result of his three-year investigation of Australia's Firepower scandal, a case involving offshore havens and corporate fraud.

The hard drive contained more than 260 gigabytes, the equivalent of half a million books. Its files included two million e-mails, four large databases. There were details of more than 122,000 offshore companies or trusts, and nearly 12,000 intermediaries (agents or "introducers"), in more than 170 countries.

Ostensibly, the aim is "to allow the public to see inside the offshore world in a way that has never before been possible", and while it is acknowledged that much of what will be revealed is "perfectly legal", the extreme secrecy offered by tax havens also facilitates the use of anonymous entities to commit crimes, evade taxes, hide assets from creditors and avoid regulations.

Says ICIJ: "This secrecy can ultimately undermine democracy by granting a certain class of individuals the ability to play by a different set of rules", and hence the game is on to reveal the names of the guilty ones.

With the Guardian amongst the papers taking the lead in the UK, alongside the BBC's Panorama there seems a definite left-wing bias, so the motivation must be seriously suspect. But that does not stop some interesting and important material emerging.

Cutting out the middle men, the main stories and background are detailed on the ICIJ website, and there is doubtless more to come. So far, though, the Guardian has only fingered a very few people.

One such is Jean-Jacques Augier, Hollande's campaign co-treasurer and close friend, who has been forced to publicly identify his Chinese business partner. This emerges as Hollande is mired in financial scandal because his former budget minister concealed a Swiss bank account for 20 years and repeatedly lied about it.

In Mongolia, the country's former finance minister and deputy speaker of its parliament it another one outed. He says he may have to resign from politics as a result of the investigation. And these are but the first of the names using of companies in offshore havens, particularly in the British Virgin Islands, where owners' identities normally remain secret.

Nevertheless, given that the multi-national team has been working on this for the best part of 15 months, there is remarkably little to show for the effort, even if we are offered a good insight into how the shady world of nominee companies actually work.

And despite the thinness of the material, there seems sufficient for a co-ordinated demand for action on tax havens, not only in the British press but also in Germany, where Schäuble is calling for an FBI-type organisation to target tax evasion.

Probably, we are now getting close to the real agenda, and it may be only a matter time before the "colleagues" get involved, demanding a "European solution" to a European problem – even though there is a global dimension. And one could imagine the Guardian being fully in favour of that.

Yet, despite all this, there is at the heart of the stories, a real issue. Before this is over, we might get a better understanding of how the "dirty money" business really works.