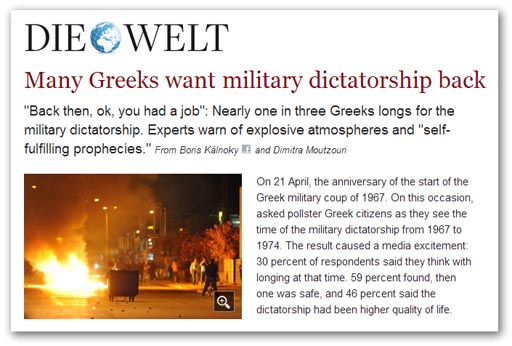 A rather sad reflection of the state of Greece comes from Die Welt, with the results of a recent survey that showed a very substantial minority of the population wanted the return of the military dictatorship.

The occasion was the anniversary of the Greek military coup, which started on 21 April 1967 – a mere 46 years ago and thus within the living memory of many. Thirty percent of respondents wanted the Colonels back, 59 percent thought the streets were safer with them, and 46 percent said the dictatorship had provided a higher quality of life.

This, of course, was a regime characterised by random arrests, torture and arbitrary justice, yet a significant number of people are prepared to accept that in return for stability, personal safety and prosperity. It goes without saying that. a military dictatorship would be incompatible with EU membership.

But, if this survey is presented as a choice between democracy and dictatorship, the retort from one respondent, an unemployed 45-year-old, makes the appropriate point. "We have no democracy anyway", he says.

A choice, therefore, between a dysfunction government and one that works – neither of them democracies – is entirely rational, especially as the current crop of politicians are regarded as crooks, as indeed many are.

What is sad is that there seems no aspiration to replace the current system with anything which approaches a true democracy. One can only suppose that the word has been so debased, and the concept so tarnished, that few people have any faith in the idea.

But what we are actually seeing is the effects of a lack of democracy. For too long, people have tolerated corrupt and incompetent politicians, within the framework of a system that denies people power, and thus bears only a passing resemblance to a democracy.

That, in turn, has led to a widescale retreat from politics, where the political class of "professional" politicians have taken over the running of the government, and the people have allowed themselves to be excluded from decision-making. The trouble is, as we have observed before, if you don't take an interest in politics, it will take an interest in you.

That, really, is what the Harrogate Agenda is all about. For too long, we have allowed the political classes to define what they mean by democracy, and have accepted what they tell us at its face value. But democracy is actually about people power. One hoped that the Greeks might understand this and start to re-assert their own power.

Whether they do or not, though, there is a lesson for us. If we follow on the same path trodden by the Greeks, we now have a very clear view of the eventual destination. And it ain't pretty.