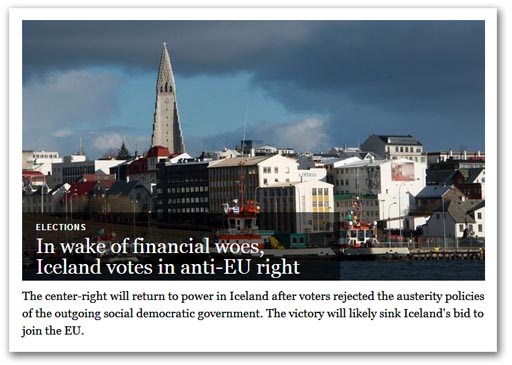 One of the great boast of the "colleagues" in the past has been the number of countries wishing to join the EU. Amongst those ready to join, it was always implied, were Iceland and Norway – if only those pesky people would stop being so hostile about "mother Europe".

Any road, one part of that dream is well and truly shattered with the general election in Iceland. There, the centre-right has returned to power after voters rejected the austerity policies of the outgoing social democratic government. The victory, it is generally acknowledged, will sink Iceland's bid to join the EU.

With the votes now counted, the Independence Party and the Progressive Party gained a combined total of 38 seats in the 63-member parliament, taking 51 percent of the national vote. The Social Democratic Alliance and its junior partner, the Left-Green Movement, were projected to lose just over half of their seats.

Before the elections, Bjarni Benediktsson, leader of the Independence Party, together with the Progressive Party – the two big winners of the day – had made it clear that they could terminate EU accession negotiations, which had in any case been suspended since January, in anticipation of the elections.

And no one can suggest that this is anything other than a full-blooded rejection. Unlike so many other countries, where apathy rules, in Iceland there is no shortage of interest in the political process. Turnout was over 80 percent of the nearly 238,000 voters.

With a population of 320,000 little Iceland is going it alone. Despite the huge problems it has confronted, this is a self-confident nation that does not feel the need to shackle itself to a corpse. The rejection is complete, and effectively final.