Afghanistan: the Taliban sends a message 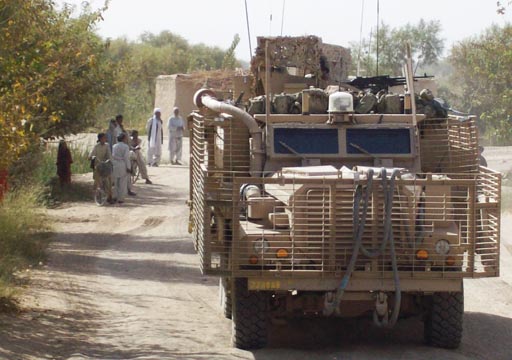 It was bound to happen sooner or later ñ and now it has. Soldiers have been killed ñ three of them ñ after a Mastiff protected patrol vehicle had been hit by an IED. Variously, between six and eight others are said to be injured.

Reports are patchy, but the fullest ñ if not necessarily the most accurate ñ account seems to be offered by the Mail, which describes the 27-ton vehicle as the "15-tonne Mastiff", two short of the Daily Express, which gives it 17 tons, ten short of the actual empty weight of the Mastiff II/III series.

The vehicle was travelling in the Nahr-e Saraj district of Helmand Province, escorting a convoy along Route 611. This is a newly constructed road which had been used to showcase the reconstruction and development which has been taking place in the province, and thus a prime target for Taliban attention. It is a known IED magnet.

Some reports had it that the vehicle was specifically searching for IEDs, which is unlikely. That is the role of the Buffalo. And while some Mastiffs are deployed with bomb disposal, these would hardly be carrying solders from the Royal Highland Fusiliers 2nd Battalion, Royal Regiment of Scotland ñ the unit of those who died.

Many of the media reports attest that the vehicle was hit by a very large bomb ñ "one of the biggest roadside bombs ever used in Afghanistan", says the Express. The blast is said to have been so powerful that it hurled the vehicle "several metres" into the air, flipping it onto its roof as it crashed to the ground.

There is agreement in reports that the road was tarmacked, which suggests that the IED could well have been a culvert bomb. This is a classic terrorist technique, commonly employed by the Taliban, and very large bombs have already been experienced - with the threat to mine-protected vehicles identified in 2008. This is not a new problem.
As early as June 2009, three Danish soldiers were killed in a Mercedes "jeep", from a such device, estimated at 350Kg weight. But already in Northern Ireland during the Troubles, culvert bombs of 1,000lb were used, one of which took out a Saracen APC near Crossmaglen on 9 October 1975.

Ostensibly, this incident vindicates the "bigger bomb" crowd ñ that vociferous group of critics who opposed the introduction of the Mastiff, on the grounds that the enemy would simply respond by using larger devices, which indeed they have.

However, it has taken seven years ñ the period the vehicle has been in service ñ finally for the terrorists to overcome the formidable defences provided by the Mastiff, and even then this is not the end of the story.

One of the points of using better protection is the very fact that you then force the enemy to use "bigger bombs". This means they are riskier to transport, they take longer to place, increasing the chances of detection, and the number of suitable placement sites is reduced ñ also assisting detection.

With that, detection technology has considerably advanced since the IRA scourge of 1975 and multiple techniques are now available. It is fair to say that, given the will and determination, incidents such as this current one are eminently preventable ñ not least through imaginative use of UAV technology, including change detection, employing video mapping.

Already, there is speculation as to why this vehicle was caught out. But, as always, the wrong questions are being asked. The issue is not the vehicle, per se, so much as the entire defensive package, of which the vehicle is but one component.
Crucially, even standard route clearance techniques should have been able to pick up a bomb this size - assuming that a culvert denial programme was not in place. And it must be emphasised that the primary defence against IEDs is not protected vehicles, but persistent and systematic route clearance, combined with good intelligence and observation.
The fact that this vehicle was hit, therefore, may suggest that British forces have dropped the ball. Questions might be asked as to whether complacency had set in, or whether simply not enough resources were being devoted to force protection. The main problem, though, may be that route security has recently been handed over to the Afghan National Civil Order Police.

At this late stage in the campaign, though, it is unlikely that there will be any great outcry as there was with Snatch Land Rovers, especially as the bulk of troops are due to be withdrawn next year.

Despite that, this incident does have an importance that transcends even the immediate tragedy of young lives cut short. In targeting the Mastiff, and successfully taking one out, the Taliban is sending a message to the people of Afghanistan.

Effectively, they are proving that they can overcome the best that the West has to offer, demonstrating their power and the impotence of the "infidels". And although news of this incident will disappear quickly from the British press, one suspects that the message will not be lost elsewhere: when the infidels leave, they will be leaving as a defeated force.