EU referendum: none of your business 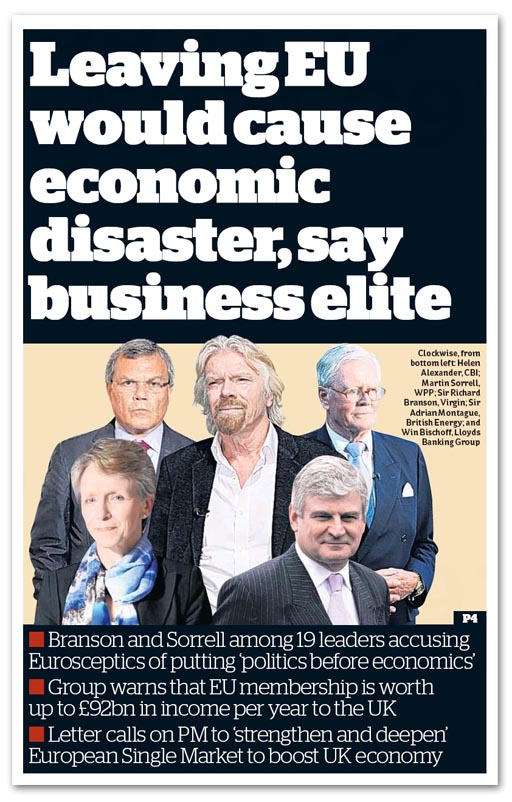 The europhile Independent wants us to believe that economics is more important than politics, giving a group of self-interested corporates license to peddle this lie in a letter to the paper, with front-page treatment afforded in this and the sister "I" publication.

It is in the latter paper that the lie is at its most prominent, the front-page legend (illustrated above) having it that, "Leaving the EU would cause economic disaster". And an egregious lie it is. Given our exit scenario, where we maintain the Single Market through membership of the EFTA/EEA, and then repatriate the acquis, the net effect of our withdrawal from the EU is economically neutral.

For sure, we lose some of our influence in the decision-making on the EU's versions of the rules for the Single Market, but this is largely compensated for by our regaining our influence on international bodies such as the WTO, UNECE, etc., from where most of the rules originate in the first place.

In peddling their lie, however, the corporates are aided and abetted by the "unilats" – the eurosceptic groupuscules who are wedded to the idea of unilateral withdrawal. These people are intent on precipitating exactly the economic disaster of which the corporates are now warning.

Nevertheless, the corporates have over-reached themselves. In complaining about eurosceptic MPs putting "politics before economics", they are placing their interests above those of the people. The EU is a political construct, and the argument over withdrawal is political. It is not about economics. It is about who governs Britain.

In this, elected MPs are perfectly right to put politics before economics. It is totally out of order for former VAT fraudsters like Branson to suggest otherwise. Business has every right to expect that its interests are taken account of, but when it comes to how we are governed, that is none of their business.

We the people must make that decision, and without the interference of the self-interested corporates, represented by the chairmen of BT, Deloitte, Lloyds, Centrica and others, who, when push comes to shove, are only interested in lining their own pockets at our expense.