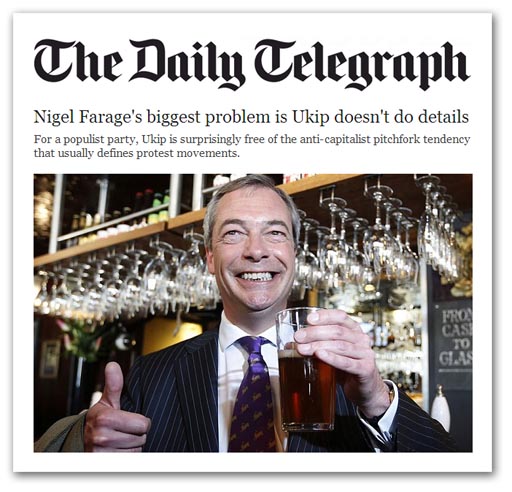 Allister Heath is slumming it for the Telegraph Media Group, although he has a perfectly good platform as editor of City AM from which to express his thoughts.

AM goes on to state that it is Farage alone who calls the shots and the party dances to whatever tune he chooses to play on any given day. Without Farage's direct approval, nothing is able to stand.

By an interesting coincidence, I had a long talk yesterday with an ex-UKIP staffer, who had worked for may years alongside Farage, and who offered exactly the same "take" that I have of Farage. Without any academic qualifications of his own, and with no academic skills, he cannot tolerate people close to him with better skills than his own, and plots to get rid of them.

That UKIP lacks both properly thought-out policy lines (better than can be formulated on the back of a beer mat after a boozy session in the pub) is, therefore, entirely due to Farage. Many people have tried, and failed to get sensible policy past Farage, only to give up in disgust, or be fired for their efforts.

Now the more intelligent journalists like Allister Heath are beginning to notice the policy vaccum. Heath thus remarks that UKIP's problem is that its policy positions are uncosted aspirations, rather than properly thought-through proposals. Until this is sorted, Heath says, they risk being torn to shreds as media scrutiny increases.

Needless to say, the rabid supporters who have come to the fold with a child-like adulation for Farage, and a naďve faith in his charm and abilities, are those who simply wish to protest against a snooty establishment, or who like how Farage "represents people like us".

These people won't mind, that Farage's arguments have all the depth and sophistication of the lower Remove, and completely lack real world appeal. But, Heath adds, much of the country will. For want of well-crafted policies, UKIP's bubble would deflate almost as fast as it takes its leader to down a pint.

What Heath has specially noted is that UKIP doesn't have a plan to exit the EU. Furthermore, it has failed to introduce alternative trading arrangements that reflect the complexities of the modern economy. The challenge, he says, is especially acute when it comes to complex rules of origin for manufactured goods, and to protect London's financial services industry against protectionism.

This has to be one of the most bizarre gaps in the UKIP platform. For twenty years, the party has existed to promote the withdrawal of the UK from the EU but, in all that time, it has never come up with a single detailed (or any) coherent plan for how we would actually effect our withdrawal.

But it actually far worse than that, a situation known only to those people who really know UKIP in depth and have worked inside the organisation - as opposed to the shallow outsiders who are vain enough to think they know what makes UKIP tick.

Anyone who really knows Farage - who really does know him as opposed to those who have swallowed the media myth - know him to be a vicious and quite unprincipled bully. The sound of the man screeching down the phone from his office in Strasbourgh, at an unfortunate colleague in England, so loud that the use of the instrument was unnecessary, is permanently etched on my brain.

Like many bullies, though, Farage is also a coward. He will not directly confront those who challenge him, or those whom he sees as a challenge. Instead, he goes by devious, circuitous routes to undermine them or remove them, where he can.

There are those in the Party, however, over whom he has no control – people who are immune to his bluster. And amongst those are a small but extremely influential group whom I have take to calling the "unilats". These are the zealots who insist on UKIP standing for immediate withdrawal from the EU, without prior negotiation.

These people are utterly tenacious, with the intensity of a religious cult. They will stop short of nothing to have their views accepted, other than partake in an honest, open debate. But they can make endless trouble for Farage within the party.

As far as I know, Farage doesn't wholly agree with them – although it is very difficult to know exactly what he does believe, beyond his immediate and oft' repeated rhetoric of arranging an "amicable divorce" and negotiating a free trade agreement.

But, whether he agrees with them or not, Farage will not argue with them, or disown them. He is afraid of them. Thus, he allows them to represent their views as UKIP policy, even though they exist nowhere on any formal UKIP policy documents. For decades, he has ducked the issue, and never takes a clear line on what the actual policy might be.

Thus does Heath assert that Farage needs to sort out the detail of his policies. At the moment, he says, they simply do not stand up to detailed scrutiny. But, as long as Farage is the leader of UKIP, the party will never be able to progress to the stage of offering settled policy on key issues.

This is the fatal weakness of UKIP. And unless the Party is able to learn to deal with it, it has the potential to bring it down. Furthermore, having become the standard-bearer for euroscepticism, Farage's personal inadequacies have the capability irrevocably to damage the movement. And that is far more important.  Euroscepticism is bigger than Farage: it should be more that just a platform for his political ambitions.