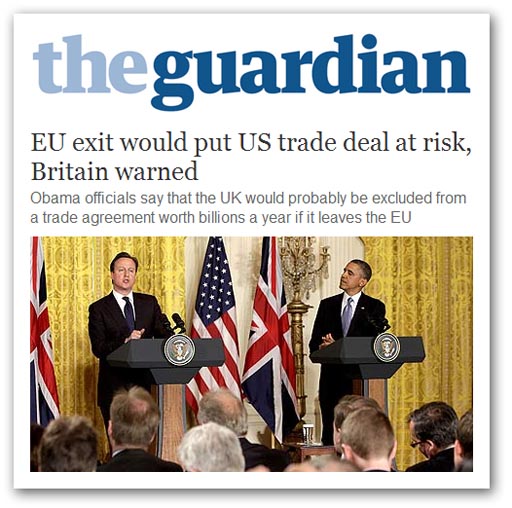 The loss-making Guardian is recording an escalation in the FUD (Fear-Uncertainty-Doubt) stakes in the EU withdrawal issue, with Obama officials saying that the UK would probably be excluded from a trade agreement worth billions a year if it leaves the EU.

This is the Transatlantic Trade and Investment Partnership (TTIP) which is in the making as a US-EU trade and investment partnership that is potentially worth hundreds of billions of pounds a year. And the Obama administration, we are told, has warned British officials that if the UK leaves Europe it will exclude itself from the deal, and that it was very unlikely that Washington would make a separate agreement with Britain.

For what it is worth, this is BS. As per Wikipedia as a convenient but not exclusive source, this deal is between the EU/EFTA states, thus comprising the EEA, and the US/NAFTA. On the face of it, even if this deal went ahead and the UK did leave the EU, it would be unaffected by Britain's new status as long as we rejoined the EEA when we left.

There can be no understating the importance of the TTIP deal – if it ever goes ahead – so the exclusion of the UK would be a major setback, and would seriously handicap any referendum "out" campaign, if we were to allow this to be an issue. Thus, more than ever before, an exit plan invoking Article 50 and negotiating continued membership of the EEA would be essential.

By the same token, going for the unilateral withdrawal option seems even more irresponsible, potentially costing billions on just this ticket. And, with the UK in the EEA, the US does not have a dog in the fight. Whether the UK then leaves the EU is none of its business and lobbying on the issue would amount to unwarranted interference in our domestic affairs.

That said, the TTIP is by no means a done deal. Obama administration officials are concerned that the uncertainty over Britain's future would further complicate what is already a hard sell in Congress, threatening a central pledge in the president's State of the Union address in February.

The Guardian tells us that, with formal negotiations expected to start within weeks, the state department already has hundreds of staff working on the partnership. Sources at US-UK meetings in London last week said American officials made it clear that it would take a monumental effort to get TTIP through a suspicious Congress and that "there would very little appetite" in Washington to do it all again with the UK if Britain walked out of Europe.

Thne we have Gary Hufbauer, a former US Treasury official now a senior fellow at the Peterson Institute for International Economics. He says that the administration's hopes to complete a far-reaching partnership in Obama's term may be over-optimistic and would be torpedoed altogether by a British exit from the EU.

"If the UK separates from the EU, I think will go a long way to derail the TTIP project entirely," Hufbauer says. "There would be a lot of questions raised. The administration has many battles ahead of it. It will add another layer of confusion on an already confused picture, and there will be lots of commercial concerns in the US [from those who] have had their eye on the UK markets".

And herein lies another layer of BS. The chances of the TTIP coming to fruition by the end of the Obama term is so close to zero as makes no difference. There are huge gaps between the sides, not least animal welfare standards which are almost certain to block an accord on trade in meat and meat products, poultry and eggs - which in turn would sabotage a farm deal.

The thinking is fine and one expects negotiators to be optimistic in the early stages, but there are huge barriers to surmount before free trade between the two blocs becomes a realistic proposition. And that simply isn't going to happen in a hurry.

But it is absolutely typical of the dirty tricks department that, already, even the prospect of an agreement should be roped in as a weapon to fight for continued EU membership. The fact though is that this is just more FUD. TTIP can be factored in to any exit plan, just assuming it is in force by the time we get a referendum.

As long as we continue to ignore the "unilat" zealots, we have nothing to worry about.