EU politics: a question of discrimination 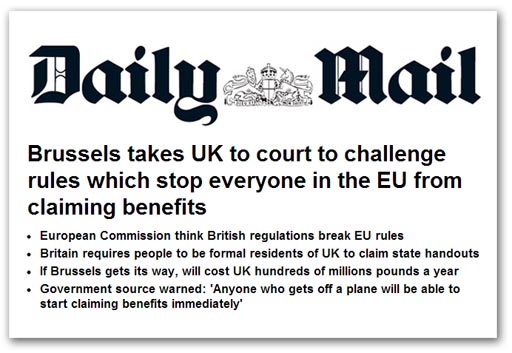 An amount of hyperventilation attends some of this morning's newspapers as they announce the start of proceedings by the European Commission in the European Court of Justice (ECJ) against the UK. This is the long-running dispute over the application of the "right to reside" test to migrants from EU member states, before they can claim certain state benefits.
Much of the reporting, such as in the Daily Mail, relies on agency copy which, in turn, relies on a flawed briefing by Open Europe, which is heavily misrepresenting the issue.

The story is cast as a battle between the UK government and the commission over the entitlement of migrants to benefits, with lurid claims being made that, without the current provisions, "Anyone who gets off a plane will be able to start claiming benefits immediately".

Iain Duncan Smith is even accusing the European Commission of mounting a "blatant land grab" into an area in which it has no authority. He declares: "The agreement in all the treaties was that this area of social security, social welfare, was a matter that was left to national governments".

But, actually, this is not primarily (or at all) about benefits. It relates to our old friend Article 18 of the Treaty of the European Union, which prohibits "any discrimination on grounds of nationality". And what the Commission is complaining about is an extra provision, upon which payment of benefits is conditional – which is applied to migrants from EU member states but not to UK citizens generally.

In terms of proximate cause, the British action conflicts with Directive 2004/38/EC, which was agreed and adopted by the former Labour government, the context of which is set out by the Commission in its own analysis. This is studiously ignored by the popular media, although the BBC makes a better fist of explaining the issues, which are now subject to a Commission press release.

The point that the Commission makes is that, in order to qualify for social security benefits, migrants from EU member states must already comply with the "habitual residence test" and it is the enforcement of the additional test which breaches the rules, on the basis that it is discriminatory.

One would not get this from the earlier press reports, or from Open Europe, which was displaying its usual hypocrisy. Non-discrimination on the grounds of nationality is an inherent provision of the EU treaties, and the only way of by-passing it is to quit the EU. But Open Europe campaigns for continued membership of the EU, so it cannot remind us of this inconvenient fact. Instead, it must skirt round the margins, evading the substantive point.

Unfortunately, though, as long as we are in the "club", we have to obey the rules.  If we don't like the rules, we have to leave the club.

UPDATE: And, just to keep the UK company, Spain is also subject to proceedings after the refusal of Spanish public hospitals to recognise the European Health Insurance Card.

In practice this means that French taxpayers investing the same amount in immovable goods abroad would face a higher tax liability, provisions which the Commission considers to be incompatible with the free movement of capital, a fundamental principle of the EU's Single Market.