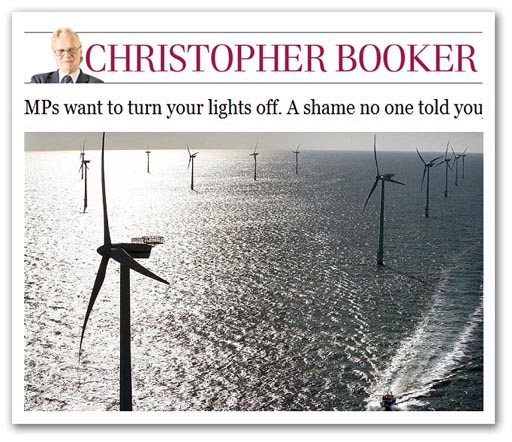 Following on from the Energy Bill debate last Tuesday, Booker writes in this week's column about the government's plans for "Electricity Demand Reduction" (EDR), which are to become the centrepiece of its energy strategy.
Unfortunately, Booker's story is based on the premise that the Government introduced and Parliament approved an amendment (spool to the end) requiring the Secretary of State to publish a strategy setting out policies to achieve a reduction in demand for electricity of at least 103 TWh by 2020 and 154 TWh by 2030.

That, as Booker writes, is something so utterly mad that, if anyone present had understood its implications, it might have made front-page news. We currently use each year some 378 "terawatt hours". So what was being proposed was that this must be cut down in six years by 27 percent – more than a quarter – rising 10 years later to a cut of more than 40 percent, or two fifths.

What we didn't realise what that this was not a government amendment. The way it is "bundled" in the Hansard record does not make this clear. In fact, it was tabled by the utterly mad Green MP Caroline Lucas. And, although there is no confirmation of this in the official record, the amendment seems to have been withdrawn prior to a division (Column 1469).

Nevertheless, energy minister Greg Barker agreed with the amendment "in principle", while secretary of state Ed Davey is clearly committed to achieving the objectives to which the Lucas amendment was addressed.

However, the substantive detail in the story is wrong and for that we apologise. Booker will publish a correction next week.